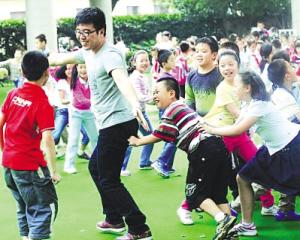 Members of the 13th Nanjing Municipal Committee of the Chinese People’s Political Consultative Conference (CPPCC) from the Democratic Progressive Party (DPP) put forward a proposal calling for social attention to the issue that a lack of male teachers hinders the development of students on January 12.

According to statistics in 2012, female teachers outnumber male teachers in a majority of elementary and secondary schools in the city of Nanjing, capital of east China’s Jiangsu Province, jeopardizing the balanced development of students.

Statistics showed that male teachers account for less than 20 percent of teaching faculties in urban primary schools and less than 40 percent in urban middle schools in the city. The gender imbalance has worsened year on year, with men becoming increasingly less competitive in local teacher recruitment.

Despite Nanjing’s education authorities taking measures to ensure that more male teachers reach the final stages of recruitment, the results proved to be barely satisfactory, as an average of 20 percent of the new recruits were men each year.

Some of the CPPCC members in Nanjing worried that the situation is somewhat neglected by most people as the gender imbalance of teachers directly impacts the development of students. If a child is taught by female teachers all through his or her early childhood, including preschool, primary and secondary school, the child may lack of the presence of a male role model, which could be detrimental to his or her balanced development.

Male teachers’ voices, body language, gestures and, most of all, their way of thinking, are all different from those of female teachers. Some people even believe that the children may developed the characteristics of a “Wei niang”, literally meaning ‘fake girl’, which is a Chinese slang term for a cross-dressing boy who is not necessarily homosexual and carries a slightly derogative connotation. Another term used is “Nv han zi,” that translates as ‘manly woman,’ which refers to Chinese women who think and act like men due to the lack of male role models in schools.

In addition, the lack of male teachers has brought the additional worry of staff shortages, as female teachers who take maternity leave after having a child can leave a large dent in faculties during that period.

The CPPCC members in Nanjing believed that the society as a whole should contribute to the solving of this problem, as it cannot be addressed simply by education reform. The public should support more men to actively engage in a teaching career instead of viewing it as a women-only job, and to stop their negative views of male teachers.