on June 2nd, 2018 Posted By BG in Articles
by Amanda McElfresh - Daily Advertiser 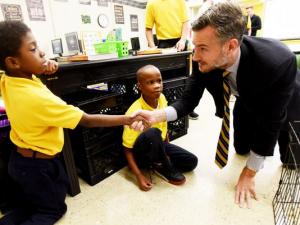 Superintendent John White said Louisiana must recruit more men into the teaching profession and do more to ensure women have opportunities to advance.

The comments came at the opening session of the 2018 Teacher Leader Summit in New Orleans.

“We must see more women at the highest ranks of our profession,” White said. “A system, a profession, that is made up of 75 percent women cannot be run largely and exclusively by men. We must make that change.”

According to the National Center for Education Statistics, about 76 percent of public school teachers in the U.S. were female in the 2015-16 school year. The figure was similar in private schools, where about 75 percent of the teachers were female.

White also said teaching should be an “upwardly mobile” profession with opportunities for educators to become administrators or mentor teachers if they choose.

In addition, White said Louisiana must find a way to be more competitive when it comes to salaries. Louisiana often ranks near the bottom of teacher salary rankings among other states and regions.

“Nobody in teaching gets into it to be rich,” White said. “But they certainly didn’t get into it to work a second job … We have to find a way, if we’re going to elevate and dignify teaching. It’s never going to be the most lucrative profession. We do need to make it a competitive profession.”

White told the educators that he was proud of the success he has seen in recent months. That includes a higher overall graduation rate, more students earning TOPS awards and more students going to college immediately after high school.

But he acknowledged that more work is needed on all levels, particularly for children who come from poor economic backgrounds, have disabilities or do not speak English at home.

“Our job, at its essence, it’s not about test scores, it’s not just about (school performance scores),” he said. “It’s about getting Louisiana’s children, all of them, to the point where they have expressed and manifested their full potential given to them by God.”