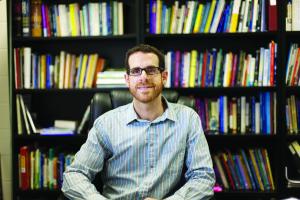 When people think about preschool or elementary teachers, usually women come to mind. Characters such as Ms. Honey from “Matilda” or Ms. Crabtree from “Little Rascals” are the widely accepted norm regarding childhood educators.

Having that preconception isn’t wrong, according to a recent Georgetown University study. An overwhelming 97 percent of the early childhood education field was found to be women, with only three percent male.

Zack Beavers, a junior early childhood education major, explains that he is usually in classes where women represent he majoriy.

“I’m kind of used to it now, but at first I was hesitant to really talk to anybody,” Beavers said. “I try to be conscious of the things I say.”

Other than occasional instances in which Beavers does not have much in common with female classmates, he tries to learn from them and pick up on ways to “be more nurturing.”

“I notice sometimes when I’m out there [at a school], I’m not as sensitive as they are to certain things,” Beavers said.

He has never felt belittled by female classmates, but Beavers did say that he has experienced judgment from colleagues outside of early childhood for pursuing this major.

“Whenever I tell people, [they’ll say] ‘You’re not going to make any money,’” Beavers said.

Early childhood education professor Bob Capuozzo has had similar experiences throughout his career.

“I have always been like the one guy out of 25 women,” Capuozzo said. “Then in my teaching positions it was always the same, so I’ve grown accustomed to it.”

Capuozzo explained that when he first began teaching preschool and pre-K, he did feel a sort of expectation from women at a center like, “let’s see what this guy can do.” But for the most part, he has been widely accepted where he has taught.

Matthew Tatman, a senior majoring in early childhood education, has felt this same initial discomfort in a class of almost all girls when he first began his major-related classes. However, Tatman explained that Capuozzo has been a role model through his education.

“[Capuozzo] has been with me for the past couple years as I’ve gone through the program,” Tatman said. “He’s been a great guiding light and a lot of help.”

It was Tatman’s high school experience with service learning at a local elementary school that showed him he wanted to switch to early childhood education rather than just education.

Tatman has never felt any sort of discouragement from female classmates, but gets the occasional small joke from his friends regarding his aspirations to be an elementary school teacher.

Capuozzo mentioned that sometimes other people think of early childhood education as a “low-status” kind of profession.

Despite the occasional judgment or past gender discomforts, Capuozzo, Beavers and Tatman all speak persistantly about differences they can and have made in the field.

Capuozzo shared that while in college he started with a health services and administration major and hated it after his freshman year.

“I switched my major to early childhood because people always said choose something you really enjoy doing,” Capuozzo said.

Coming from a big family and having experience with young children, Capuozzo felt especially called to the field.

Beavers, who would like to teach fifth grade, also explained his passion regarding the career choice.

“It’s going to sound kind of cliché, but I really just want to make a difference in the world, and I know that there are not a lot of male teachers,” Beavers said.

As far as Tatman’s aspirations go, he would like to be a role model in a field where there are few male teachers.

“I’ve counted out in the elementary school [where] I am student teaching there are like five or six guys,” Tatman said.

Though male early childhood educators are few and far between, they do not allow their small numbers to dwindle their passion for the potential to help change children’s lives.