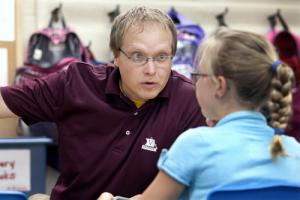 Early in his teaching career at Grand Forks’ Ben Franklin Elementary School, Harold Gustafson had a good student he described as “a little Pigpen,” named after the Peanuts character who was always followed by a trail of dust.

The boy’s father kept urging him to clean his room, but the boy refused. One weekend, the father moved out.

The boy told Gustafson that if he’d only cleaned his room, his father would have stayed.

Gustafson told the boy his parents loved him, and that the divorce wasn’t his fault. He empathized, saying, “You think when you’re older, you’re going to understand everything. Let me tell you, I’m older, and I don’t understand it, either.”

Now a substitute teacher and paraprofessional in his retirement, Gustafson told the story as an example of what male teachers can bring to the table. Empathy like that could come from a female, he said, but when it’s a male of one generation speaking to another, it’s something else.

But there aren’t very many male elementary school teachers in the Grand Forks area or in the field as a whole, a trend in place for decades.

Many educators would like to see more of a balance. For young boys who don’t have a father figure, male instructors can provide a perspective that reaches beyond the books, they said.

Of 12 elementary schools in the Grand Forks Public School District, there are 15 men teaching kindergarten through fifth grade classes, which are the elementary grade levels here, according to the district.

Some elementary schools in Grand Forks don’t have male teachers at all.

Statewide, the number of male K-6 classroom teachers has grown from 436 to 451 in the past six years, according to the state Department of Public Instruction. During the same period, the number of female teachers grew from 2,685 to 2,857. The DPI does not break down the data by grade level.

In East Grand Forks Public Schools’ two elementary schools, there were four male teachers and 46 female teachers in the 2011-2012 school year, according to the state Department of Education. The figures are in full-time equivalents.

In all of Minnesota, there were 14,134 male K-12 teachers compared to 38,476 female teachers. The state doesn’t break the numbers down to the elementary level.

The male-to-female ratio among elementary teachers in the area has been lopsided for years, according to East Grand Forks Public Schools Superintendent David Pace, who started in education 20 years ago.

“Elementary is still one area in which if there is an opening, we’ll get a ton of applications, and 1 to 2 percent of them might be males,” he said.

He thinks the trend will continue, he said. Though more applicants typically apply for elementary positions, he said, the number of men who apply has declined.

Gustafson, who taught at Ben Franklin for more than 30 years, retiring in 1999, said he is used to being the odd man out.

In 1988, he was the only man teaching first grade in the district.

Educators have some theories on why men aren’t interested in the profession.

At UND, three out of roughly 42 elementary education students were men last semester, said Elaina Bialke, a student teacher at Grand Forks’ Century Elementary School. She said one of her classmates was a man, and he “kind of felt embarrassed” about being the only one.

“I think males struggle to connect with certain ages of kids sometimes, too,” said Tim Rygh, a fifth grade teacher at Century Elementary. “In an agricultural society, the connection from the male to his kids, especially the boys, was in the field doing work, and the educational setting doesn’t always lend itself to that.”

There is also the negative association of men teaching young boys that could be off-putting to men, Gustafson said. Every time an incident with a pedophile comes up in the news, “it puts every guy that works with kids under the microscope,” he said.

Research indicates it’s perfectly fine for an elementary teacher to hug kids, but male teachers have to really watch what they do, said Anne Walker, a professor in the department of teaching and learning at UND.

“A number of men who go into (elementary education) don’t necessarily stay long,” Walker said. “Some move into leadership and principal positions, but others feel really isolated.”

“I thought I was having a positive impact on my students, but I wanted to make a larger impact,” he said. “I went to the administrative side of things to make more of a difference in children’s education.”

Male elementary teachers say the positive role they can play is as important as ever.

“After 40 years, it’s like we’re back to square one again,” said Gustafson. “The world is changing, and you can see there are a lot of guys raised in single families. And boys, they need a role model.”

The lack of male role models is evident in society, said Brent Miller, a fifth grade teacher at Century Elementary who has taught for 28 years. A lot of times, it’s the male professional athletes or politicians that are messing up, he said.

“I think for myself, I get the opportunity for nine months to be a positive impact in their life, and especially show the young boys that you might feel angry, but you don’t have to be angry like they are on (television). You can handle that differently,” he said.