on November 6th, 2012 Posted By BG in Articles
by Michael Brindley - Staff Writer, The Telegraph 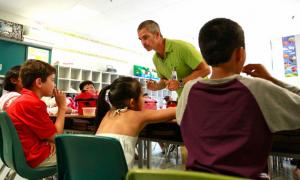 Michael O’Dell didn’t have a male teacher until the seventh grade. He’s making sure his students can’t say the same thing.

O’Dell, 40, began his career as a teacher Tuesday, hired over the summer as a new fourth-grade teacher at Bicentennial Elementary School in Nashua. As a male elementary school teacher, O’Dell knew coming in he’d be in the minority, but that’s precisely one of the reasons he wanted to work with younger children.

“It would have been helpful if I had other male adult role models in those years,” O’Dell said. “It changes the dynamic for the kids to have that, so I think I could have a big impact there.”

Male elementary school teachers like O’Dell have historically been a rarity in education. Nine out of 10 teachers in New Hampshire elementary schools teachers last year were female, according to data provided by the state Department of Education. That is the largest disparity among the three educational levels.

There are some who believe that lack of a male presence in the early years of education can give boys, especially those without a father figure at home, a negative attitude toward education.

“One of the big problems is these students are connecting reading and school in general with female behavior at a young age. We desperately need more male role models in school,” said Tim Churchard, an education professor at the University of New Hampshire.

Churchard teaches a course called “Growing Up Male in America” and said for most young boys, their male role models are athletes and rock stars. To have a man teaching them about the importance of reading could reap huge benefits later in life, he said.

The number of males in the classroom in general has been slipping over the years. A 2008 study by the National Education Association found the number of male teachers had reached a 40-year low, with men accounting for only 25 percent of all public school teachers nationwide.

However, the question is why so few of those men who do go into education look to the elementary level as an option. In New Hampshire schools, the male-female gap closes significantly at the higher levels. Females account for 75 percent of teachers in middle schools and 60 percent in high schools.

O’Dell suspects it has to do with men identifying less with the characteristics expected of teachers at the earlier grades. Younger kids may tend to need a little more hand-holding and nurturing, but O’Dell believes it’s at the elementary level where he can make the biggest difference as an educator.

“Having that impact during the early adolescent years can really put kids onto a different trajectory,” he said.

As it turns out, O’Dell replaced one of the school’s few male teachers who retired at the end of last year. Principal Kyle Langille said she wasn’t necessarily looking for another man to fill the position, but said O’Dell stood out as the best candidate. Having more male teachers helps to balance out the staff and gives young male students a positive male role model, something not all of them have at home, she said.

Finding them is not easy, though. When positions open up at her schools, Langille estimated fewer than 1 percent of the applications that come in are from men.

“It might just be a comfort level, working with kids at a younger age,” she said.

Of the school’s staff this year, Langille said there is only one other male classroom teacher. The school’s physical education teacher is also male, she said. Districtwide in Nashua, males made up 21 percent of the teaching staff during the last school year, but only 7 percent of the elementary school teachers.

Stuart Robertson, a professor in the education department at Rivier College, was an elementary school teacher in Pelham for 23 years. For much of that time, he was the only male teacher in the building.

“To me, it’s so important to set that foundation,” he said. “I couldn’t imagine being anywhere else.”

Robertson believes one of the primary causes for the lack of male elementary school teachers is the perception that working with younger children is more of a woman’s role.

“That it’s a time of mothering and taking care of young children, and that’s seen as more of a female role,” he said.

Robertson said men can also often be discouraged from working in elementary schools by their peers and family. And there is also the concern, though more recently, that men could have about putting themselves in situations that might require more physical contact with children, fearing the perception of overstepping their bounds and potential lawsuits.

If a child is crying, a comforting hug from a female teacher could be perceived differently than a hug from a male teacher, he said.

“That can be an added burden when you really just want to be there to help the kids and work with them,” Robertson said.

So what is the answer? Unfortunately, there’s no magic bullet, Churchard said. Even in his education classes at UNH, Churchard still sees the disparity. In one of his teacher preparations classes this year, only three of his 30 students are male. One of the issues can be the relatively low salary that teachers receive, he said.

“Money is part of it,” he said. “It isn’t seen as a real job in the male psyche. The idea of the schoolmarm still lingers.”

Nashua Superintendent Mark Conrad said that while the lack of male teachers is an issue, his concern is more with having a staff that reflects not only the gender of the students but the overall diversity.

“From my perspective, it’s a broader issue, having teachers that more closely reflect the demographic makeup of students,” he said.

That would include having more teachers of color and teachers who can speak other languages, as well as more male teachers, he said. One way of addressing the issue is to recruit prospective teachers who more closely reflect the student body, he said.

“It’s beneficial for students to have those role models,” Conrad said.

Standing at the front of the classroom Tuesday morning, O’Dell asked his students what characteristics they want from their teacher. Nice, kind, funny and caring were among the responses from the students. It was the first day, so O’Dell went over the ground rules for things like recess. O’Dell asked the class if there was anything they wanted to know about goals for the upcoming school year.

“Don’t be afraid to ask questions. That’s how we learn,” he said.

O’Dell recently moved to the area with his wife and two children from Seattle and decided he wanted to leave his job in the financial world to pursue a career in education. He completed his master’s degree program at Southern New Hampshire University in May. He said his biggest challenge this year will making sure he doesn’t get overwhelmed.

“Trying not to over-think things,” he said. “The academics will come, but creating that positive learning environment is key.”