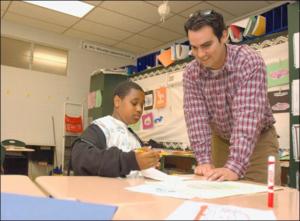 Preston Rogers’ fifth-grade students weren’t playing the board games they had on their desks Thursday morning — they were designing them.

“I want them to be able to give instructions without them being there,” Rogers said as each student wrote down rules to the different games.

Now in his second year at Grant Foreman Elementary School, Rogers seeks to do more than instruct students on writing instructions. He said, “The most important thing for me is to be a positive role model for the kids, to influence the kids in a positive way.”

Other male teachers across the Muskogee area report having that same goal — to be a positive male influence.

However, male teachers continue to make up a tiny minority of elementary-level educators. And it seems that as the grade level drops, so does the percentage of male teachers.

The organization MenTeach, a Minnesota organization dedicated to increasing the number of males working with young children, posted a survey on its Web site showing that males constitute less than 20 percent of America’s 2.9 million elementary and middle school teachers. The 2008 survey, based on source data from the Bureau of Labor Statistics, showed even more drastic differences among different grade levels:

At Northeastern State University, males made up 18 percent of students going into all levels of teaching, less than 1 percent of those going into elementary teaching and none going into early childhood, according to Dr. Kay Grant, dean of the NSU College of Education.

No male teachers were listed at the Early Childhood Center.

Fort Gibson has three male teachers at its Intermediate Elementary, none at the Early Learning Center. Hilldale has one male teacher at the Upper Elementary, which serves grades three through five, none at its lower elementary.

Tahlequah Public Schools has five male teachers in grades pre-kindergarten through fifth. They include three physical education teachers, a fourth-grade teacher and a third-grade teacher.

“He looks at each child at their level,” she said. “He’s creative, talented and very caring.”

Adams said Lee plays an important role as a positive role model for the young children.

“Many don’t have fathers at home,” she said. “They see the positive and good things that daddies can do.”

Sandy Brewer, incoming principal at St. Joseph Catholic School, agrees with the assessment. The school has two male teachers in the fifth and sixth grades.

“They’re wonderful role models for the boys,” Brewer said. “The boys need to see more than women helping the students.”

“We would certainly like to have more male teachers as far as positive role models are concerned, but there are a number of societal factors that keep them from doing it,” she said.

For example, many men might seek higher salaries in other careers, she said.

“Unfortunately, males who go into this area have to justify why they would want to teach that age of childhood,” she said.

Though in short supply, male teachers are in high demand, Grant observed. “The ones that are in first, second or third grades are snatched up pretty quickly.”

“Then the principal said, ‘Would you mind teaching second grade,'” he said. “You have to be willing to be flexible.”

Rogers said he realizes he is in a unique position.

“All the ladies I’ve worked with have helped me grow as a teacher,” he said. “And I’m friends with all the other men teachers.”