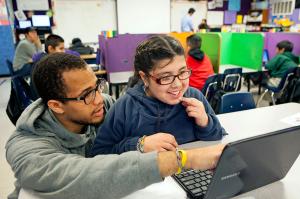 Men and women tend to choose different career paths, and researchers have identified this as the biggest reason men make more money. So if men and women were equally represented across all occupations, would it close that gender pay gap?

Teaching is just one example of an occupation segregated along gender lines. Growing up in the 1990s, I didn’t have a male teacher until the seventh grade. Data suggest that’s still a typical experience: According to the Labor Department, about 80 percent of elementary- and middle-school teachers are women.

A wide array of other jobs in the United States are overwhelmingly done by one gender or the other – from low-wage cafeteria workers (61 percent women) all the way up to the C-suite (75 percent of chief executives are men).

But according to a study released July 13 by the job-search site CareerBuilder, that could be changing. Women are entering traditionally male-dominated jobs in greater numbers, and vice versa. One of the more dramatic examples: A full 95 percent of firefighters are men, but nearly a third of new firefighters hired since 2009 have been women, according to the study. On the other side of the coin, just 20 percent of elementary school teachers are men, yet men make up nearly half of all new hires in the field over the past eight years.

The softening of those gendered barriers, and evolving perceptions of which jobs are appropriate for whom, is a product of fundamental changes in the US economy, and, if the trend continues, could inch women closer to equal pay with their male counterparts.

But it’s not a silver bullet. The pay gap is a multifaceted problem without a clean fix – men still out-earn women even within the same occupations, and a dearth of women at the top of the career ladder persists.

“We could have perfect gender parity and still have a pay gap, but it’s still good news,” says Emily Liner, an economist and senior policy advisor for Third Way, a moderate economics think-tank.

To compile the report, CareerBuilder’s research arm, Emsi, drew from Labor Department and state or local sources to find male- or female-dominated occupations, and then to look at the gender ratio of new hiring in those jobs between 2009 and 2017.

Gender parity hasn’t improved markedly for every career, but the study finds that women have made inroads in the past eight years in occupations including CEOs, lawyers, web developers, dentists, sales managers, marketing managers, chemists, and financial analysts. There’s even been a big increase in women hired as sports coaches and scouts.

Some of these shifts for men and women are borne out elsewhere. According to the US Census Bureau, the number of men in nursing careers, while still small, has tripled since the 1970s.

A number of factors could be driving that migration. For men, Ms. Liner says, the evolution into a service economy is altering perceptions of what is acceptable work. “Automation and globalization are the reasons men are considering jobs they may not have before,” she says. “Manufacturing jobs, those lost to off-shoring, they tend to be male-dominated. But every community has a elementary school, every community has a hospital. So there is place-based work available to them.”

For both men and women, seeing peers take those less conventional career paths can get the ball rolling toward gender parity even faster, says Rosemary Haefner, CareerBuilder’s chief human resources officer. “It’s, ‘I know someone who does this [job] who is similar to me.’ That might be causing some acceleration there.”

In terms of increasing the 80 cents a woman earns for every dollar a man does, easing the job market’s gender segregation could play a big role. According to a 2016 paper from Francine Blau and Lawrence Kahn from Cornell University, occupational differences – sales managers versus telemarketers, for example – account for 33 percent of the gender pay gap. Men and women working in different industries accounts for another 18 percent. Liner, in her research on how gender is linked to salaries, found that jobs that account for the top 10 percent of earnings in the US are almost entirely male-dominated. In contrast, women occupy over two-thirds of the lowest-wage jobs that the Labor Department tracks – entry-level retail and food service positions.

Even within those low-wage categories, there are often stark gender divides. Parking lot attendants, for example, are overwhelmingly male, and they make about $3,000 more per year on average than cashiers, who skew female. “Another one is cleaners of vehicles and equipment,” Liner says. “They’re mostly male and get paid better than maids and housekeepers.”

Historically, too, just the influx of women or men into certain careers has influenced their prestige and earning potential. Computer programming started out as unglamorous work done primarily by women, but became better-paying and respected as men became the majority. The reverse is true for a number of jobs now occupied primarily by women.

But not all of them. Pharmacists make up an occupational group that has both increased the number of women in its ranks over the long term and retained high earnings. Pharmacy is the second-highest-paying profession in the US, and has a smaller pay gap than other prestigious fields, including business and law. In a 2014 speech, Harvard labor economist Claudia Goldin credited the job’s flexibility, made possible by technology and the standardization of the work itself, as a major factor in its ability to recruit women and retain them even as they start families.