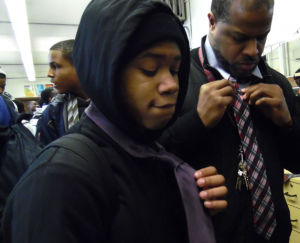 For more than 20 years students put on their best suits for “Male Leadership Day” at Murrell Dobbins CTE High School. Year after year, since Commercial and Advertising arts teacher Troy Stratton has been around, students struggled to tie their ties. Some students did not have a tie at all.

“We’re talking about 200 — 300 young men who don’t have ties,” Stratton said in an interview.  Stratton decided two years ago to do something to help his students, and “Knot Me” was born.

The teacher first decided to collect ties to give to the students. He posted a request on social media for donors to send ties to the school. Family members, friends and even strangers began to share his call for ties and the next thing he knew, hundreds of donations were coming in.”The first year we collected 500 ties that came all over the country, some as far as Washington state,” Stratton said.

With all the ties in hand, Stratton then called together several male sponsors. Stratton and the sponsors gathered in a mirrored room the day before the school’s Male Leadership Day in 2015 and taught the entire male student body how to tie a tie. The students then got to keep their ties.

“The ties weren’t perfect knots, but they were on their way,” Stratton said of the young recipients and their effort.

Stratton decided to make the lesson into a regular program. The name “Knot Me” came from his insistence of not excluding any student from learning.

“I always taught young men in my classroom how to tie ties, but never the entire school,” he said.

“I think it was a much needed complement to our education program,” Damon said.

After the lesson, each student receives an exit ticket. The ticket shows the student is able to tie a tie on their own three times. The ticket also has instructions on the back, just in case the holder forgets in the future. Stratton said students appreciated the lesson.

“They loved it,” he said. “Even the young men who said they already knew how to do this.”

With all of the students learning the first year, the tie lesson was taught to only the freshman class in February. Some of the seniors joined the program as mentors for the freshman students this year.

“That was great because when you can teach someone something like that, that shows mastery,” Stratton said.

He usually collects ties over the summer, with many donations coming from retirees. The ties that need freshening up are repaired and pressed by the school’s fashion class.

For Stratton, a tie is essential to making a good first impression. He says the simpler the tie, the better. With “Knot Me” being such a success, the teacher is thinking about expanding his class to cover proper shirts for an interview.

Principal Damon said the tie lesson promotes the idea that it is always better to be overdressed than under dressed.

“We help our children be overdressed and prepared, which helps with their confidence and spills into their performance,” she said.

Stratton said anyone interested in donating a tie can mail it to Murrell Dobbins High School at 2150 W. Lehigh Ave, Philadelphia, Pa. 19132.