on July 8th, 2012 Posted By BG in Articles
by Yang Yijun - China Daily 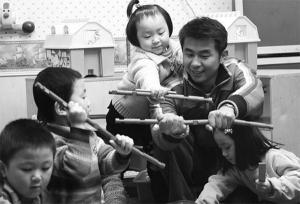 Children in the brand new Haoertong Kindergarten like to boast to their peers at other kindergartens: “Our principal is a handsome uncle.”

After seven years of teaching in kindergartens, Zhu, 29, continues to bring vigor to the kindergarten that is otherwise staffed by women.

“It’s understandable that boys tend to be feminine nowadays, as they are usually looked after by women: female teachers in kindergarten and mothers or grandmothers at home,” he said.

“Interestingly, I find that on the first day of a new school year most crying children are boys,” Zhu continued. “So I often joke that it’s no wonder Shanghai men are said to be afraid of their wives.”

As a male teacher, Zhu is determined to change the situation by teaching in a more “manly” way.

In the hall of the kindergarten stands a huge model of a pirate ship, which Zhu said he wanted as soon as he saw it.

“Female teachers usually decorate rooms with flowers, which are beautiful. But I thought, why not put up something for the boys, such as planes or ships?” he said.

He installed netting around the pirate ship so children can safely climb to the top of the flagpole.

Within a week, the ship became a favorite with the children, especially the boys.

He has designed the kindergarten as an amusement park, with facilities such as mini-golf course and a train station.

“I hope the facilities not only have a lovely appearance, but also help encourage the children to move their bodies,” Zhu said.

The principal has also included more challenging games, such as wall climbing, arm wrestling and skating in daily courses for the children to build up their courage, even when faced with failure.

“I always encourage the boys to take part in more sports, because they will become more confident when they are involved in what they are good at,” he said.

“At that time, people were prejudiced against male kindergarten teachers, as they thought it was a woman’s job,” he said.

But Zhu loves children and has a passion for teaching. “Kindergartens need male teachers, but very few people were doing it at that time,” Zhu said.

After graduation, he was offered a position in the government, but turned it down.

He was determined to be a kindergarten teacher, even though he was paid less than 2,000 yuan ($295) a month.

The first year was tough for the pioneer. His greatest difficulty came from parents.

“They were afraid that male teachers might be too careless to take care of their children,” he said. “Parents of the girls in senior classes were the strongest objectors.”

Zhu soon managed to dispel the parents’ doubts by his hard work and professional knowledge. Some girl students even like to have him braid their hair.

Once a parent even offered him four times his salary – plus a free apartment – to be his child’s private teacher.

Gradually, he gained a reputation among parents. Some even requested that their children be sent to his class.

“I’m grateful for the parents’ support over the years,” he said.

When he had to leave his old kindergarten after being appointed principal of the new one, some parents even wrote letters to him.

“They said I’d better take good care of myself and not neglect my family because it was not an easy job, which is somehow true,” said Zhu, who devoted his whole summer holiday to the new kindergarten, working each day from 7 am until almost 10 pm.

Zhu said he used to drive his wife to work because they were colleagues. But she now has to spend one and a half hours on the bus by herself.

“I take it as my mission to do something for kindergartens,” Zhu said. “I hope I might serve as a good example for more male teachers to join kindergartens. It takes time, but I really hope one day we might be able to have one male teacher for each class in the kindergarten.”