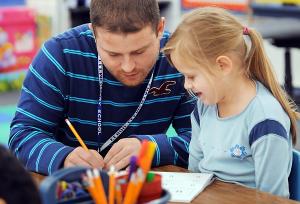 For starters, he is the only male kindergarten teacher in Kalispell Public Schools.

But Benkelman also has distinguished himself by learning enough Russian to communicate with students whose first language isn’t English.

His first experience teaching a student whose first language was Russian happened two years ago. Benkelman, then 24, was in his first year of teaching at Elrod School.

“She understood most of what I was saying to her, but she wasn’t necessarily always able to communicate to me what she was feeling,” Benkelman said. “It took her a couple months to really want to interact with other kids [because] she knew she didn’t sound right as far as her English was.”

That little girl was very sharp, however, and learned by observing Benkelman or her classmates what she needed to do.

“She’d just kind of sit there and watch for the first few minutes of the activity,” Benkelman said. “Sometimes she’d still be the first one done.”

A Russian-speaking student in Benkelman’s class the following year had a little more trouble understanding what was wanted of him.

“He struggled to understand what I was saying, even basic stuff like, ‘Work quietly,’ or ‘Color neatly instead of scribbling,'” Benkelman said. “He didn’t know why he was coloring.”

That was when Benkelman decided to find a way to better communicate with the student. He turned for help to other students, three sisters whose first language was Russian who cleaned his tables every day.

After practicing with the students, Benkelman would find the school’s English as a Second Language tutor and ask her to check his pronunciation.

“I’d kind of butcher it, and she’d tweak a few sounds for me,” he said.

Later, when the little boy was running laps around the classroom and ignoring Benkelman’s request, in English, to stop, Benkelman put his new phrases to work.

“I told him in Russian, ‘Eyes on me. Please listen,'” Benkelman said. “He stopped and had a deer-in-the-headlights look, and then he came over and joined the activity.”

By the end of the year, Benkelman said, that student was one of the top kids in the class.

Benkelman slowly built his repertoire of Russian words and phrases throughout the year and continued the practice this year, when he has yet another Russian-speaking student in class.

“I try to just learn a word or a phrase a week that helps me build upon what I know,” he said.

He keeps sticky notes with the new phrases on his desk and tries to use them at least a couple of times each day: Repetition helps cement what he has learned.

While he said he would like to be fluent in the language one day, for now Benkelman is content to learn phrases that will help him teach math and reading — but especially the latter.

“I think that the best gift that you can give somebody is the gift of reading,” he said.

That’s why he loves his job as a kindergarten teacher, he added. “To know that you were the first person to work with them and teach them how to read books is a pretty cool thing.”

“I just enjoyed watching them learn something new, picking up something you taught them,” he said.

Benkelman was just three semesters away from a bachelor’s degree when he transferred to the University of Montana. His desire to help young students learn propelled him toward a degree in elementary education — a field dominated by women, at least in the classroom.

Benkelman takes seriously his role as a male teacher in a lower elementary grade.

“Not a lot of [students] have male role models or somebody to make them feel welcome,” he said. “Some of them have a rough home life.”

Benkelman said he had a stable family life and positive role models while he was a child and wants to provide similar stability for students.

“I took it for granted until I started teaching,” he said. “I can’t believe how much my parents did for me. Everybody should have the opportunity I had when I was growing up.”