on December 8th, 2010 Posted By BG in Articles
By Becky Schlikerman, Tribune reporter 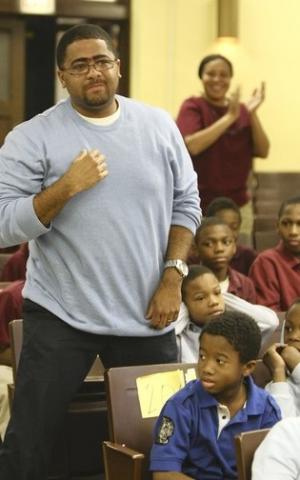 After a breakfast of toast and fruit, he headed to work at the city’s Ryerson Elementary School, where he planned to jump-start his third-grade students after the holiday break.

Part of the morning, he found out, was going to be taken up by an assembly. What he didn’t know was that he was the guest of honor.

Chaney on Monday was awarded the Milken Family Foundation’s coveted Milken Educator Award, which comes with a $25,000 prize. He is one of 55 teachers to win the award this year and the only one from Illinois.

He was chosen because of his dedication to students and their academic performance, said Jane Foley, senior vice president at the Milken foundation.

“He’s a leader,” she said. “He’s a role model to his students and to the other staff.”

An emotional Chaney shed tears and dropped his head onto his folded arms when his name was called during the surprise award assembly at the Chicago Public Schools elementary school in East Garfield Park.

Chaney, 29, is a native of Texas who taught in Houston before moving to Chicago. He has been at Ryerson for three years and has been teaching for six.

Chaney was shocked he could use the prize money however he’d like. He didn’t immediately know how he would spend it.

“The sky’s the limit,” he said, adding he may use some of it to take the students on field trips or for school supplies.

“I’m lucky and fortunate to have him at this school,” said Principal Lorenzo Russell, who also teared up when Chaney’s name was announced.

Chaney, who is teaching a class of about 25 boys this year, is patient and understanding, the principal said.

“They see a male, positive role model, and they see a person that’s really dedicated and giving them that time that’s necessary for them to be successful,” Russell said of the students.

Chaney is known to arrive at the school by 7:30 a.m., though classes start at 9 a.m., to tutor students and act as a counselor, school officials said.

In class, Chaney said, he teaches his kids to be “Chaney’s champions.”

“You can be great and you will be great — especially if you’re sitting in front of me,” he said he tells his students.