on February 4th, 2011 Posted By BG in Articles
by Melikssa M. Scallan - SunHerald 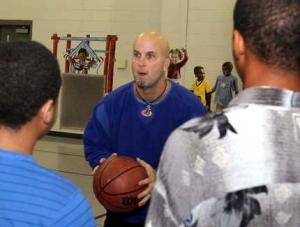 When Adrian Dodson took a job at Pass Road Elementary teaching physical education, he wasn’t sure he would like it. He had been teaching and coaching at middle and high schools for two years and wasn’t used to younger students.

Dodson is one of only a few male teachers in elementary schools in Mississippi and across the country. In the Gulfport School District, there are 209 elementary school teachers. Of those, 11 are men, about 6 percent.

While teaching has long been a predominantly female profession, Dodson and other experts in the field believe that needs to change to give students the best experiences in the classroom.

Dodson said it’s particularly important in elementary school where students get the foundation for the rest of their education and their life.

Bryan Nelson is the founding director of menteach.org, a Web site that works to promote hiring men and minorities in K-12 schools. He worked as a teacher and an administrator before attending Harvard, where he did research about why there aren’t more male teachers.

Nelson said there’s a stereotype that men aren’t nurturing and so they can’t be teachers.

“There’s a message in our society that nurturing isn’t valuable,” he said.

He added that some men fear they will be accused of wanting to be close to young children for the wrong reasons and that’s why they don’t go into teaching. Also, the pay tends to be less for teachers than administrators. If a man is the breadwinner in the family, he may choose to be an administrator even though he loves teaching.

Dodson said there is a stigma attached to male teachers, particularly in elementary school. He believes some men aren’t as sensitive as women when it comes to working with younger children.

“There’s not a lot of guys who have the innate need to nurture children, and that comes into play,” he said. “Some have it and some don’t. Small kids need a lot of attention and I think you have to have more patience than at the upper grade levels.”

Nelson said pay is more of an issue overall than at different levels of K-12. In most states, including Mississippi, teachers are paid based on their degree and years of experience whether they work as an elementary, middle or high school. Although, teachers who also coach a sport in high school make extra money.

Nelson said in order to steer more male college students toward teaching, he believes the climate needs to change and that schools should embrace different teaching methods that accommodate male and female teachers.

“Children need strong men in their lives every day,” he said. “We want a good teacher, and we want students exposed to a variety of teachers.”

Nelson’s group is participating in programs in which young men — in high school and college — are brought into after-school curriculums so they can work with kids. Another program, known as a breakthrough collaborative, has college students working with middle school kids to encourage them to go to college. Nearly half of the college students participating are men.

Here, the Mississippi Association of Educators is working on several projects to encourage more men and minorities to be teachers. Frank Yates, executive director of MAE, said he hopes to finish the research and present a report on the teacher shortages to the Legislature in time for the 2012 session.

“Money becomes the biggest issue,” Yates said. “People may enjoy teaching, but they find they just can’t make it on that salary.”

Nelson said he hopes programs like these will encourage more men to become teachers.

“A lot of guys don’t start out as education majors,” Nelson said. “They transfer to it and usually they fall in love with it.”

Dodson said once he began teaching in an elementary school, he was hooked.

“I’ve made more money at other things, but with this, I’m doing what I love.”