on November 6th, 2013 Posted By BG in Articles
by Amanda Greene - StarNews Online 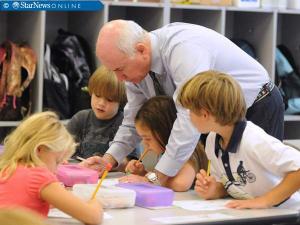 Chuck Gore retired from the Navy as a commander after 24 years, but he took his nautical love into his second-grade classroom at Carolina Beach Elementary School when he entered his next career as a teacher.

Students are gunner’s mates, signalmen and quartermasters sailing on the U.S.S. Excel.

“Welcome aboard” is the standard greeting for visitors.

Male teachers are a rare breed, especially in elementary schools, no matter whether in New Hanover County, North Carolina or nationwide.

The concern, some education experts say, is that fewer men in the classrooms results in less diverse role models for students.

The lack of male and minority male teachers is just one of the topics the New Hanover County Schools Equity Advisory Commission is discussing as it meets Wednesday afternoon. The group, which formed this year, is trying to address many different issues of equity within the district, including how to bring more men into its classrooms like Gore.

After raising his children and coaching little league baseball, Gore felt comfortable with an elementary age group – whether it’s teaching his students the difference between fantasy and realistic fiction or more complex addition and subtraction concepts.

“I decided to go into elementary education because I felt I was needed. There weren’t very many men in my classes at UNCW,” Gore said. “A lot of men view students of this age as more of a nurturing field, and they think that’s more in line with a woman’s work, to be nurturing.”

The U.S. Bureau of Labor Statistics estimated men were 18.2 percent of the total teacher population in elementary and middle schools across the country last year.

In North Carolina during the 2010-11 school year, there were about 19,000 male teachers versus 75,900 female teachers, according to N.C. Department of Public Instruction numbers.

Local school systems are on par with state and national male teacher statistics.

In New Hanover, Pender and Brunswick counties, men make up about 20 percent of the teaching pools.

In New Hanover County, where the student population is splits about evenly between girls and boys, only one in five teachers are men. There are 347 male teachers in the county’s classrooms, compared to 1,421 female teachers.

The majority of those male teachers, however, are at the middle school and high school levels. Most elementary schools in New Hanover County have five or fewer male teachers, and many of those teachers are in specialized fields such as technology, exceptional children or physical education.

Minority male teachers are even rarer.

African American male teachers make up just 2 percent of the teaching population nationally, according to Department of Education statistics. And in January, U.S. Education Secretary Arne Duncan began a renewed push to attract more black men to the teaching profession.

“Most schools that I’ve been in there were only one or two male teachers,” he said. “I realize there are a lot of broken homes, and the children respond to me differently, and it also does good for the female and male students. They think it’s neat to have a male role model. I’ve been called daddy a couple of times.”

Education experts say there are several reasons why men are avoiding the teaching profession.

One reason, some say, is because many young men don’t view teaching as a way to fulfill the stereotypical breadwinning role. The median income for a teacher in North Carolina is $46,850.

“I think the overriding thing is the salary, and even though education has changed and females are the breadwinners of some families now, males see that as a deterrent to coming into that field, especially elementary education,” said John Welmers, New Hanover Schools’ assistant superintendent for human resources.

Welmers said some male teachers the system wanted to hire were wooed away by private industry that could pay twice what the schools could give and also offered to pay off the students’ college loans.

“There’s also this perception that because of the proximity men have to young people, they’re afraid of being caught in a situation where they’re accused of being inappropriate with a minor. That’s a real fear,” said Donyell Roseboro, associate professor at the Watson School of Education at the University of North Carolina Wilmington.

Also, the General Assembly voted this year to end soon the 25-year-old Teaching Fellows education scholarship program, which included a focus on recruiting male and minority students who wanted to become teachers. Roseboro said many education schools are wondering how they will fill that void.

Men “are just not in the pipeline. The supply just does not support the need right now,” said Danny Bland, director of teacher recruitment for Teaching Fellows. “We were one of very few entities focusing on that specific issue.”
History repeating?

Getting a Teaching Fellows scholarship was the deciding point for Justin Fischetti’s teaching career.

He said the tough budget times have made the education field less attractive for some.

“Right now, teachers in North Carolina are on the fourth year where we haven’t gotten raises,” he said, “and there’s not as many incentives for a student in high school to think about becoming a teacher.”

Fischetti said men who are considering the teaching field need to focus on specializing in core subjects.

“At the high school level, most of the men have something to do with athletics, but if we look at the core classes of English, math and science, there are still more women,” he said. “I think more male students need to have male teachers they respect and look up to in the academic world as well as in athletics.”

The tide could be changing for men in the classroom.

If history repeats itself, Bryan Nelson, director of the Minnesota-based research group MenTeach, believes a new crop of male teachers in the U.S. could be on the horizon.

In the last few years, Nelson has fielded more calls from returning veterans from the conflicts in Iraq and Afghanistan who are considering teaching.

“There have been two points in history when the percentage of men in teaching has gone up – in 1929 with the Great Depression and around 1945 when men were coming home from World War II with the GI bill,” Nelson said. “Now, we have a bad economy once again and a lot of soldiers coming back with generous GI bills. They’ve seen a lot of harsh, horrible things, and they want something hopeful. I see this changing.”