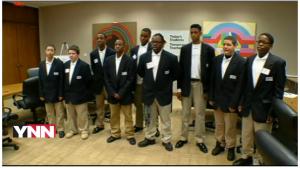 Local organizations united Thursday at The Leadership Academy for Young Men to support freshmen boys with dreams of becoming teachers.

Chase Bank funded the local organization, “Today’s Students Tomorrow’s Teachers,” as they launched the Male Teacher of Color Initiative within the academy.

The program’s aim is to increase diversity among male teachers. The Rochester City School District says that less than two percent of the five million teachers hired nationally are African-American men. However, the majority of the student population in Rochester are members of a minority group.

“If we can just make these young men be quality teachers to give back to the community of Rochester, it’s nothing but a win- win for everybody,” said LeAndrew Wingo, assistant principal at the Leadership Academy for Young Men.

Ten young men joined the initiative today. The hope is that after supporting the boys throughout high school and college, they come back to work as teachers in Rochester.