on August 8th, 2013 Posted By BG in Articles
By Nicholas La Salla - Rockfordparent.com 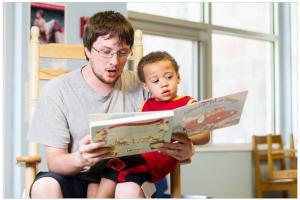 In a career field dominated by women, male daycare teachers are making a difference in the lives of Rockford children.

Women make up 94.7 percent of all childcare workers, according to the January 2011 Household Data Annual Averages report by the Department of Labor’s Bureau of Labor Statistics. This disparity creates unique challenges for those daycare centers that employ male teachers, including Rockford centers Kindercare, Trinity Day Care, and Circles of Learning.

“I think the kids communicate pretty much the same way they would with a female teacher,” he said. “Some kids listen better because of a male influence, they take it [like I’m being] more of a father figure, and follow directions better.”

Particularly important, though, is giving children a positive male role model. In today’s society, with more mothers taking on jobs to help support the household, daycare centers have become much more than a place for children to sit and wait for their parents’ return. They are playing a bigger role in the growing emotional development of the children they serve.

Wernick works with many children from households headed by single moms.

“(The kids) only see their dads every once in a while,” Wernick said.  “So just having that male figure . . . to be able to talk to, you know, it helps them out a lot emotionally.”

To Wernick, the greatest challenge for a man in this field has nothing to do with the children – it’s often the parents.

“A lot of them like that there’s a male in the daycare center,” Wernick said, but added that some parents see too many examples on the Internet or in news coverage of men in positions of authority abusing their power and hurting children.

His job can be an uphill battle, in other words, but it’s one that Wernick and other men employed at Rockford daycare centers are taking in stride.

The daycare centers themselves are adapting well to employing men in the female-dominated field.

“All the staff members and everybody, [they] treat me the same,” Wernick said.