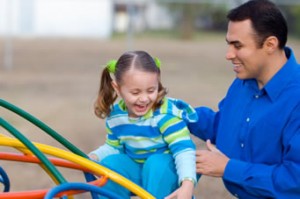 Kindergarten teacher Paul Ferreter knows he is putting his credential on the line each time he opens his arms to hug one of his students.

While more and more teachers, especially male educators, are putting up barriers to protect themselves from false allegations, Ferreter said he can’t bring himself to forgo hugs. But his hugs have been modified. He calls them “sideways hugs.”

“Our teachers union has told us we shouldn’t pat the kids on the shoulder, there should be no touching,” said Ferreter, who teaches at Golden Empire Elementary School in Rosemont, Calif. “I’m taking that risk because I think it’s important.”

In the last decade, the number of male teachers has held steady in California making up 27 percent of the teacher workforce in kindergarten through 12th grade.

Sexual allegations against teachers, however, are most commonly levied against men in the profession.

Last month, a private school in Citrus Heights, Calif., was closed amid molestation allegations against the male principal. Teachers and parents at the school, Creative Frontiers, said they feel the allegations are the result of perverse minds misconstruing an educator’s affection toward students.

Citrus Heights police and the state Department of Social Services insist they have evidence that Robert Adams molested at least 10 children. Adams, who denies the allegations, has not been arrested or charged in the case.

Innocent or guilty, some male teachers say those kinds of allegations and headlines in other cases in the country are influencing how they physically interact with students.

“High-profile cases of teachers being accused make people hypersensitive,” said Carlos Rico, a fifth-grade teacher at Ethel Phillips Elementary School in south Sacramento, Calif. “When I was growing up, I’d hug teachers. The rule of thumb now is not to even touch students.”

Rico said a fellow male teacher found himself accused of inappropriate behavior when the teacher told a female student to turn in a cellphone she had in her back pocket. “A parent accused him of looking at the student’s bottom,” Rico said.

Rico and other male teachers offered these guidelines:
– Always leave a door open.
– Never meet alone with a student.
– Delegate to female teachers any discussion of dress code violations with female students.