on September 14th, 2020 Posted By BG in Articles
By Hosam Elattar - Voice of OC 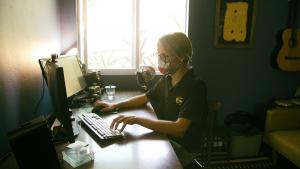 When a global pandemic interrupted the school year in March, teachers had to trade in their classrooms for Zoom calls and teach students from behind a screen with little time to prepare.

Now after six months – several schools have opened up in Orange County through waivers and school districts might soon be given the state’s blessing to allow students to return to the classroom. Still some districts, parents and teachers are opting to continue with virtual instruction.

Either way, the pandemic has changed what being a teacher looks like. It means a bigger workload and a greater effort to reach students to keep them engaged in lessons. Each district has its own challenges as well.

Here’s a look at the experiences of two of them.

Alan Hoffmann has spent nine years as an English teacher in the Santa Ana Unified School District. Hoffmann grew up in Santa Ana and attended school in the same district.

“We have a block schedule. The kids only have half of their classes on each given day, and we have five minutes between classes but that’s not even enough time for me to go grab a drink of water or use the restroom because I’m helping kids get to their next class, and then having new kids come in. I really have to be on it,” said Hoffmann, who teaches at Mendez Fundamental Intermediate School.

He said he preps for his classes in the days before and spends time every night grading even on weekends. Hoffmann said it falls on the teacher to check in with the parents after a student is absent from the virtual class multiple times.

Hoffmann added that his students feel trapped at home and they miss school.

“They’re having to work with whatever space they have so if they’re in an apartment, they might not have a place all to themselves. Sometimes I’ll see other family members walking by or doing other things. It definitely makes it difficult for the kids to stay focused,” he said.

One of the biggest challenges when the pandemic hit was internet and laptop access for students.

“Even for people who had the internet at home there were huge slowdowns because so many people were working from home and so that really falls on the internet providers because they weren’t able to meet that need,” Hoffmann said.

“The district has done a very good job making sure that the students have hotspots and they’ll check out Chromebooks for all the students. There are definitely still issues with the internet, but it’s so much better than in the spring.”

Hoffmann said because the number of coronavirus cases in Santa Ana are among the highest in the county there’s a good chance the district might be one of the last to bring students back into classrooms.

“If we’re thinking of more affluent areas where the internet and computer access is much better and outbreaks aren’t as big — it’s kind of like a double whammy,” Hoffmann said.

Vadim Rubin, a history teacher at Northwood High School in Irvine, said his district was quick to get out hotspots and Chromebooks to students. He has taught for 19 years in the Irvine Unified School District.

“A lot of students didn’t need any of that,” Rubin said. “When we were teaching in the regular classroom before March on any given day like a third of them would just have their own computers with them in class.”

Rubin said there are glitches with the internet and teachers have to improvise or change lesson plans when that happens but he doesn’t see an equity gap at his school that he knows is more prevalent at others.

“You live and die by technology and it sometimes fails you so you have to improvise. The other day, my internet just cut out in the middle of a lesson and I had to restart everything,” he said.

Rubin said he tries to replicate as much of how he taught in person in the virtual classroom.

“We discuss things. There’s some lecturing. I use breakout rooms to have them collaborate with one another. It’s as best as you can do in replicating what I do with group work where students discuss ideas and questions and readings and groups and I hover over them and answer questions,” he said.

Mondays are reserved for office hours when students can reach out to Rubin, as well as for department and staff meetings to coordinate plans. Tuesdays and Thursdays are for live instruction and Wednesdays and Fridays for independent study. Odd periods meet on certain days and even periods meet on the other days.

Rubin said his workload has increased tremendously because now the nature of the work is different, including the AP government course he has taught for years.

“It just becomes much more time consuming to get stuff done when you’re trying to make them work in this virtual environment whereas it’s much easier to do them in the classroom,” Rubin said. “I’m doing everything from scratch so it’s like teaching the class almost like the first year, which is much more intense and time consuming.”

Rubin said there is a lot of pressure to revise the educational model to have a bigger virtual component at least in the short term.

“Unless there’s a quick fix in the form of a very effective vaccine, I think education is going to be impacted in the years to come and in enormous ways, and I can’t really foresee all the ways that that’s going to happen,” Rubin said.

Hosam Elattar is a Voice of OC Reporting Fellow. Contact him at helattar@voiceofoc.org or on Twitter @ElattarHosam.