on July 3rd, 2011 Posted By BG in Articles
by Amy Crawford - Tribune-Review 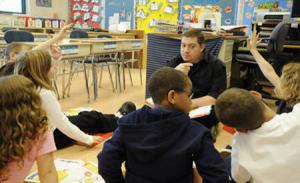 Sixteen kindergarteners sat cross-legged on a rag rug, singing songs about the days of the week and the months of the year.

The classroom at Carnegie Elementary School in the Carlynton School District was furnished with the usual toys preferred by 5-year-olds — trucks, blocks, a kitchen play-set, a miniature makeup table. There was a collection of books nearby, and a set of puzzles in cardboard boxes.

In addition to lists of class rules and words the students had learned to read, Penguins, Steelers and Pirates posters decorated the walls.

The sports motif was all that suggested anything unusual about the teacher, who sat in a white wooden rocking chair at the front of the room.

“Good morning, kindergarten friends, how are you?” chanted Don Alexander, as his students clapped out a rhythm. Their eyes were fixed on Alexander, a tall man in his early 30s with floppy brown hair.

Though he fits in well with his mostly female colleagues and loves his students and his job, Alexander is a rarity: He’s one of the handful of men in Western Pennsylvania who teach the early grades.

“I think it would be nice to have balance, to get the interactions between male and female teachers,” Alexander said, after his class had lined up and left for library time. “I know that’s probably not going to happen.”

In Allegheny County, about 3 percent of kindergarten teachers on a 2008-09 state Department of Education list were men. In Westmoreland County, slightly more than 1 percent were men.

Men make up about 6 percent of first- through third-grade teachers in Allegheny County and 3 percent in Westmoreland.

Statewide statistics were not available because the Department of Education does not track teachers by gender.

The disparity is not surprising to Peter Pizzolongo, the senior director of professional development at the National Association for the Education of Young Children and a former preschool teacher.

“Historically, there have been very few male teachers,” Pizzolongo said.

Stereotyping keeps many men away from the early grades, he said. The low pay and status can dissuade men from teaching younger children, and many men fear false allegations of impropriety, although those accusations are rare.

Nationwide, according to the federal Bureau of Labor Statistics, slightly more than 2 percent of kindergarten and pre-kindergarten teachers are men.

That is something Pizzolongo’s group is working to change.

“It’s important for children to see men in nurturing roles,” he said.

Denise Johnston of Lower Burrell agrees. Her son, Benjamin, 8, is a student in Ron Spiering’s second-grade class at Bon Air School in the Burrell School District.

“I think he is just a positive role model,” Johnston said of Spiering. “In addition to his dad, (Benjamin) sees someone who behaves compassionately and is tuned in and interested in what they’re doing.”

During a recent language arts lesson, Spiering and his class sat on the floor at the front of the room and took turns reading an article about fossils. When Spiering asked for volunteers to read, most of the 18 boys and girls raised their hands.

“I feel like there should be a male in every grade,” said Spiering, who is one of four male teachers at Bon Air. The others teach fourth and fifth grade.

During the past several years, educators have become concerned that boys are falling behind girls on such measures as state tests, graduation rates and college attendance. Some have suggested that a lack of men as academic role models might be partly to blame.

Bryan Nelson, the founding director of MenTeach, an national nonprofit that works to get more men into classrooms, noted that high school drop-out rates are higher among boys, especially blacks and Latinos.

“What message do children get when they don’t see a man in the schools, other than the principal, the janitor and the PE teacher?” he asked. “It’s: ‘You don’t belong here.’ ”

Spiering said he believes his example shows students — especially boys — “what men can do, the fact that it’s OK to be good at school.”

“I had a parent call me once and tell me, ‘Thank you,’ because the student always wanted to do what his dad did — a truck driver. And he came home one day and said he’d changed his mind, now he wanted to be a second-grade teacher,” Spiering said.

Anthony Barbato, a kindergarten teacher at Metzgar Elementary in New Alexandria, said he’s noticed the influence he has on boys.

As a student teacher, Barbato noticed when a boy began coming to school every day in a blue shirt and khaki pants — the same ensemble Barbato often wore.

“With the boys, you have more of a connection with them, because you were a little boy,” Barbato said. “They watch you, how you act.”

Now in his third year of teaching, Barbato said he would encouraged men who plan to teach to consider working with younger students.

“They’re so excited, and they want to do their best,” Barbato said. “They come in every day with a smile on their face.”

“In your student-teaching experiences, they’re going to place you in the older grades,” said Gregory Egnor, principal at Bon Air.

Egnor, who praised Spiering for bringing “something unique” to the school, said that teacher preparation programs should make an effort to give men a taste of the lower grades.

Alexander, the Carnegie kindergarten teacher, said he learned that he enjoyed working with 5-year-olds only after staffing needs forced him to transfer from sixth grade.

“It was unlike anything I could have expected,” Alexander said. “It’s fast-moving, it’s challenging. You’re teaching all day. There’s the perception, oh, you teach kindergarten, that’s very cute. Just because they’re younger doesn’t make it less challenging.”

Pizzolongo said he was hopeful future male teachers would get that message.

“One of the things that we know about the Millennials is that they haven’t bought into some of the stereotypes that the Baby Boomers have,” he said. “They say, ‘Yeah, I’m nurturing. You got a problem with that?’ “