on March 3rd, 2014 Posted By BG in Articles
By Ovetta Wiggins - Washington Post 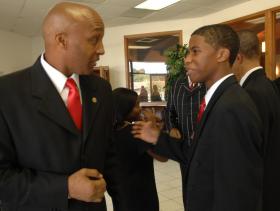 When Albert Lewis attended middle school in Prince George’s County in the late 1990s, he was shocked to walk into his eighth-grade history class and find a black man sitting behind the teacher’s desk.

Nathaniel Laney’s presence was a first for Lewis, who is now a teacher himself. Until then, he had never seen a male teacher outside of gym class.

Seventeen years later, not much has changed for students in Prince George’s County and in other classrooms across the country.

Hoping to devise ways for the school system to recruit and retain men, Lewis, Gaskin and more than 100 male educators filled the auditorium at Charles Herbert Flowers High School in Springdale on Saturday for the county’s first male educator summit.

Curtis Valentine, the school board member who organized the discussion, said addressing the male teacher shortage is a key component of improving student achievement in Prince George’s.

“I believe that when teachers are more reflective of the student body — both race and gender — students perform better,” he said.

Richard M. Ingersoll, a professor of education and sociology at the University of Pennsylvania, said the overall number of teachers has increased over the past 30 years, but the percentage of male teachers continues to drop.

“It won’t be long before [women] are 80 percent” of the teachers in the country, Ingersoll said. “I just don’t think this is going to go away.”

Men made up 24 percent of the teaching pool in public schools in the United States in 2012, according to the most recent numbers available from the National Education Association.

Veteran and new teachers talked about the financial struggle of staying in Prince George’s County, which routinely loses teachers to the District and Montgomery County, where the pay is higher. They discussed the need for mentors for young male teachers.

And when Van Rawls, a math department chair at Flowers High School, said schools lose good teachers in the classroom because they have little chance of making more money unless they become administrators, the audience applauded.

“There is no real career ladder without moving,” Rawls said.

Organizers of the summit said they plan to hold another session in May, where teachers and principals will be assigned to one of three work groups: mentoring, imaging and system reform.

Valentine said he wants to create mentor programs that would partner senior teachers with novices, administrators with teachers, and teachers with college students or mid-career adults considering education. He said he wants the county to create a campaign to “re-image teachers,” showing that the profession is desirable for boys. And Valentine said the final group will work with the administration to design a more efficient recruitment process and to create a “master teacher” pipeline, which would allow teachers to earn more.

Gaskin said budget cuts in past years have hurt the county’s efforts to recruit and offer support to male teachers. Kevin Maxwell, the new schools chief, who got his start in Prince George’s County, is committed to focusing efforts on addressing the male teacher shortage, he said.

For boys to consider teaching as a career, they need to see male teachers in the classroom, Ingersoll said. Because they don’t, “it becomes a self-fulfilling prophecy that males don’t become teachers,” he said.

“This is a pipeline issue,” said Christian Rhodes, the education adviser for County Executive Rushern L. Baker III (D). “We really have to grow our own teachers. . . . We have one of the largest populations of black and Hispanic male students in the country. We have to create a pipeline for them.”

Lewis, who grew up in Prince George’s and was named the county’s 2013 Teacher of the Year, said having Laney as a teacher made a difference for him.

“I could identify with him and because of his influence, it made me want to push myself — to not disappoint him,” said Lewis, who like many of the students in his class was raised in a single-parent household.