on December 15th, 2010 Posted By BG in Articles
by Elahe Izadi - Maryland Gazette.net 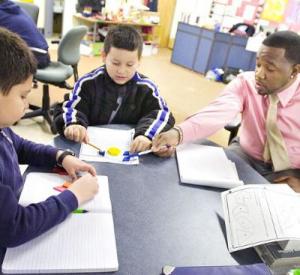 Thomas S. Stone Elementary fifth-graders standing before Michael Gilchrist’s class on Monday morning did more than present their answers to fractions problems: They also defended them.

For Gilchrist, understanding material means being able to explain the correct answers, not just give them — and his methods were recognized when Gilchrist won November’s countywide Teacher of the Month award after Marilyn Moreno, the regional superintendent, nominated him.

Gilchrist said the award is a reflection of the hard work of teachers and staff in the school after the past few years.

“I think it’s overdue for somebody in our building because we have quite a few people who work very diligently,” Gilchrist said. “I’m happy the school is getting the recognition and I just happened to be a part of that.”

The 28-year-old Hyattsville resident grew up in a home of educators — his mother is a special education teacher in Montgomery County and his father is a guidance counselor at Ridgecrest Elementary School.

“I couldn’t mess up in school,” he said. “It was just embedded in me that you’re going to do well.”

He attended Bowie State University and majored in math, but his interest waned until he married it with education. He went on to Towson University for a master’s degree in mathematics education.

Gilchrist has been a teacher at Thomas S. Stone for six years, and spent the past three years as the school’s math department chair and SmartLab facilitator. The SmartLab is a laboratory in which students use technology, such as computers and video projectors, for hands-on learning.

The school’s former principal used Title I funding to purchase the SmartLab from Creative Learning Systems, and Gilchrist trained to be its facilitator three years ago, he said.

It’s a method of teaching that emphasizes going through project steps as a way to learn material and concepts, and Gilchrist leads lessons in math, science and reading, using building tools, computers and video, he said.

“He helps us when we need help in the classroom or when we don’t understand something,” said Auny’a Jones, 10, of Mount Rainier.

“He allows them to mess up, but teaches them step-by-step where they went wrong,” she said.

Despite his age, Principal Helen Smith said Gilchrist commands a high level of respect from teachers throughout the school. Beyond the classroom, he also began a school step team as an outlet for students to express themselves and perform.

Smith said the step team also encourages leadership qualities within students, who have to maintain perfect attendance and B-averages to be members. And being a young male teacher, which is uncommon in many schools, makes him a role model for the students, she said.

“To have that male figure and that strong male figure, it encourages our male students,” Smith said. “They look up to him.”