on June 30th, 2013 Posted By BG in Articles
by Kara Vickery - PerthNow 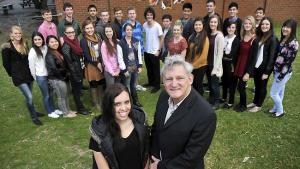 He’s the man who made a difference.

When students were ready to drop out of Willetton Senior High School, they decided to try again because of him.

When one girl didn’t attend classes because she had depression, he was the one who rang her at home every day to see if she was all right.

That man is maths teacher James Whiteley, whose lessons in life went way beyond the classroom.

Alexandra Ridgway, 18, credited him with turning her life around.

“As a sufferer of depression I began to withdraw,” she said.

“He began to call me every day I didn’t go to school … and check how I was going.”

Ms Ridgway is now studying political science at the University of WA.

Fellow student Caitlin Largue admits she wouldn’t have bothered showing up for school if it wasn’t for Mr Whiteley.

Amid a chronic shortage of male teachers in WA schools, the inspiring Willetton teacher has spent the past two decades proving how vital their influence can be on a student’s education.

Mr Whiteley describes himself as just “one of many cogs in the wheel”, but Ms Largue had no trouble drafting the help of more than 20 classmates to nominate him for Australian of the Year.

And now he’s also nominated for a Pride of Australia award.

“He just made me feel so much happier at school,” said Ms Largue, who is at university studying science.

“Year 12 was really hard for me. He just made us feel warm and welcome. We actually wanted to go to school.”

Kim Bowey, 17, who is studying physical education at Edith Cowan University, said: “He had a major impact on me.” And Caitlin Verhaaren, 18, said: “Because of him I decided to attempt to finish high school, go to university and become a teacher to inspire other students to succeed in being their best and go for their dreams.”

Nominations for the Pride of Australia program close on July 16. Now in its ninth year, the program recognises the country’s unsung heroes in 10 categories, including the Inspiration Medal, an award solely for educators, and for which Mr Whiteley has been nominated.

Mr Whiteley was a maths teacher at WSHS for 19 years before taking up a position in Port Hedland.

He transferred back to Willetton two years ago to take on the role of year group co-ordinator.

“It was a big decision because I was a deputy principal up at Hedland, but I’m glad I did what I did,” he said.

Mr Whiteley said it was important men were supported to continue teaching.

“I have met many male teachers who have actually left the profession,” he said.

“I would really encourage them to stick with it.

“The year co-ordinating, it’s those type of positions or those moments that make it all worthwhile. You can kind of grow and watch them go from awkward teenagers into adults.”