on August 12th, 2016 Posted By BG in Articles
by Sheila Wayman - Irish Times 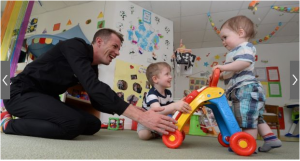 “Early childhood education in Ireland at the moment is at a very exciting place,” says David Kenna (29), a “floating” junior manager with Park Academy Childcare, which has eight centres in south Dublin/north Wicklow, including an outdoors nature kindergarten.

“It is all moving towards child-led learning and learning through play; that’s what really appeals to me.”

He first worked in early years education as a teacher’s aide when he lived in New Zealand for a while, before returning to Ireland.

Having just completed a three-year honours degree in early childhood education and care at the Wicklow campus of the Institute of Technology Carlow, he combined his studies with working his way up the career ladder at the Park Academy. There were 42 in the class and the one other male was employed in a primary school.

“My mother is a special needs assistant and she has always encouraged me with children, it was a step from there,” says Kenna, who believes a lingering stigma still puts off men from becoming involved in childcare.

“It is also the money. The money is not great and we are all educated professionals.” However, personally, he has experienced nothing but positivity, having worked with all age groups.

“The parents have been more than welcoming. As I work for Park Academy and we have male chefs and bus drivers, they are already used to seeing men around the place. There is at least one male early years educator in each of our centres.”

Men bring an added dynamic to learning because “we naturally see things a little bit differently from women”, he says. “Some children don’t always have dads in the home so it’s nice for them to have a male role model at this early stage of their lives.

“I am a bit of a country bumpkin,” he adds, “so hail, rain or snow I love making sure they still get to go outside.”

Men are unusually visible in Kenna’s workplace because 27 of the 196 staff working at the Park Academy’s eight centres are male, according to HR manager Ann-Marie Donohoe, and of those, 12 are child educators.

It’s a dramatic change from when she started working there in 2013, when she reckons there would have been be only two to three men working directly with the children.

She believes the company’s emphasis on outdoor education and a wide variety of programmes, including after-school clubs, attracts men. Male participation has “organically grown”, she says, without the company setting out to recruit men.

“We have seen nothing but a positive impact of having men here. Our education co-ordinator has come back with so many reports over the time saying it has just been fantastic for the children.”

Men in childcare is becoming more the norm and she believes they “don’t give a damn now” what other people think. Fathers too are much more hands-on, which is also changing attitudes.

The men are finding it a very rewarding job, which is good to see, says Donohoe, who has recently been revising staff policies to ensure they are gender neutral.

As a mother of two young children who attend one of the centres, she likens the “different approach” of the male staff to the complementary strengths a mother and a father bring to raising children.