on July 3rd, 2012 Posted By BG in Articles
by Sarah Palermo - Monitor staff 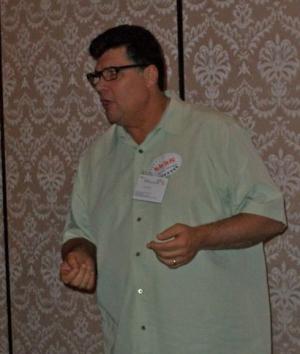 When Jerry Parr of Londonderry was 3 years old, he knew what he wanted to be when he grew up. But when he was in college, he had a moment of doubt.

Remembering his own preschool teacher, he worried, “Will I play the piano and sing well enough to engage my students? Will my drawing abilities ever be up to par? Am I creative enough and sensitive enough?”

Then he realized the root of his worries. His own teacher, like more than 95 percent of teachers for young children, was a woman. He’d never seen a man doing this sort of work.

“Had I just had a male support system, other men doing this, I think it would have been easier. What I did have was a sixth-grade teacher that I used as a role model,” Parr said. “He was 6-foot-4, a big, real masculine kind of a guy, and I’m 6-foot-4, and so it married for me in my brain that big guys could do this, too.”

More than 40 years later, Parr is now working to help more men overcome their fears and doubts and enter the teaching profession, where they are vastly underrepresented.

Statewide, 22 percent of teachers are men, a figure that has stood relatively unchanged for the past decade.

The number of male teachers tops 30 percent in only 28 of the 175 school districts in the state, according to data compiled for the Monitor by the New Hampshire Department of Education.

What does it mean to be one of the few?

For J.J. Prior, who just finished his first year teaching sixth grade at Gilsum Elementary School just outside Keene, it’s no big deal.

“It really has never struck me other than when I might have been talking about trying to find a teaching job, people would always say, that’s great, we need more men in teaching in elementary schools,” he said.

But it can be frustrating, said Parr, who was often pulled from class to help coworkers lift, move or reach things, or discipline students.

“Until people knew me, they would assume I was the disciplinarian. If the principal wasn’t available, they would turn to me, but it took no time for them to realize I was not that person and it wasn’t working,” he said.

“But you also automatically became the custodian, the Mayflower Moving man, the handyman. It’s always okay to help your colleagues, but if you don’t have the option to say no without them becoming angry, there could be friction points. It was assumed because you were a big strong man you would do those things even if it took you away from your own classroom for an hour.”

It can also be embarrassing, like when Gabe Mosca, a middle-school teacher in Epping, was locked out of his classroom so a coworker could pump her breast milk.

And it can be humbling, Mosca says. Early in his career, he scoffed at veteran female teachers who claimed they could accurately predict the sex of two unborn babies based on where the mothers-to-be were carrying.

“I claimed they lacked scientific evidence, but they were right on both accounts,” he said.

Mosca and Parr both said they chose their profession inspired by friends and family who were teachers. For men without those role models, the career path is an unlikely one.

Current college students thinking of going into education have been second-guessing whether they’ll be able to support themselves or their families, said Patricia Cantor, a professor in the Early Childhood Studies Department at Plymouth State University.

“It’s no longer seen as a field that guarantees you a lifelong career,” she said. “Teaching has really taken a hit in terms of prestige and public perception. There’s been a lot of political talk against teachers, with teachers taking the blame for a lot of stuff.”

It was Mosca’s father, a teacher himself, who was most discouraging, and for just those reasons, he said.

“He just made sure I knew that I’d never grow wealthy as a teacher,” he said. “Many of my friends after college chose to go into finance or apply to law school. . . . Teaching was once seen as a noble profession. An increased focus on wealth as equating to success, a vilification of the public sector, and the lack of importance placed upon education at home have all chipped away at teaching’s standing in society,” he said.

Students in an NHTI program for older people leaving one career for teaching say they often abandoned dreams of teaching because they were discouraged by family and friends when they were younger, said Kelly Dunn, director of teacher education at the institute.

“Many of them worked in science or math industries, and they come to us saying, ‘I always wanted to be a teacher, but people said I should go into something where I could make more money,’ ” she said.

“That’s still where we lose a lot of potentially great elementary teachers today, people in their lives saying they should go into something else.”

Men who do enter teaching may have job security in mind when they choose a concentration, looking to the state’s list of critical teacher shortage areas, which includes high school math and science, but not general elementary education.

Men also tend to gravitate toward teaching older students and away from younger students because high school teachers are viewed as “content experts, not caregivers,” said Dunn.

“People still traditionally think of women in those roles of nurturing and they don’t encourage men to go into elementary education,” Dunn said. “In preschool, it’s even more apparent to folks at that level, when you look at the characteristics of what you think of a preschool teacher, focusing on early learning and working with development needs of children, people still predominantly think that females are better suited for that.

“Even when you picture a teacher picking up a child if they fall or hugging them, any of those things, people still see women in those roles in our minds.”

Sometimes, the discouragement is subtle, and has been linked to homophobia, said Cantor said.

She reports hearing from male alumni about administrators saying they’d never hire a male preschool teacher, and parents who request male teachers not help with bathroom time or diapering duties.

But the perception that women are more naturally suited to teaching and caregiving is one that was manufactured by education leaders more than 150 years ago, Cantor said.

“Horace Mann, he was trying to recruit women because he could pay them less, and he needed to make it acceptable for women to work outside the home. He did that by saying women are more naturally nurturing so they should be with children,” Cantor said.

“It’s absolutely not true . . . and it’s really sad. Considering that the number of single parent families headed by women is increasing, there are a lot of children who may not have a nurturing male figure at all. How are little boys going to get ideas of what it means to be a caring adult to young children if they don’t see it modeled for them anywhere?”

Some research points to academic benefits, as well as social ones, for boys taught by male teachers.

In 2006, Thomas Dee, then an economics professor at Swarthmore College, studied a nationally representative survey of nearly 25,000 eighth-graders that was conducted by the Education Department in 1988.

He found that having a female teacher raised the achievement of girls and lowered that of boys in science, social studies and English. When a man led the class, boys did better and girls did worse.

But rather than jumping to conclusions or implementing broad, single-sex schools, “we should be thinking more carefully about why,” he told the Associated Press when his study was released.

“It’s not a question of men being better or women being better, but one simple way to look at it is, what if you just switch the gender? If every single educator in a young child’s life was a male, it would seem odd. It would seem that they were missing a different perspective and culture and a balance,” he said. “Children need balance, it’s that simple.”

As part of his work, Parr met recently with a group under the umbrella of the World Forum Foundation, which is trying to attract more men to teaching across the world.

Scotland, where more than 1,000 men have entered teaching in the past decade, had the best success story, Parr said.

The program, a partnership between the university system, the government and a non-profit foundation, includes a special curriculum for male teacher candidates and a cohesive bonding for cohorts of male students as they go through university together. It’s being replicated around Europe, he said.

Norway, where the goal is to have men represent 30 percent of early childhood educators by 2014, has focused on outdoor education programs, some that operate without any buildings at all, Parr said.

In America, those kinds of programs aren’t likely to find support or funding, but with many traditionally male-dominated fields like construction constricting in the post-recession economy, one way to attract more men to teaching is simple, he said: just ask.

“They’re coming out of construction and truck driving and blue-collar jobs,” Parr said. “If we can make sure they know the option is there, the training is available, and that organizations are willing to have them, they’ll come. But so far, they haven’t been invited. It’s a non-traditional path for them, and I don’t think they are going to pick up the phone and ask if a preschool would hire a man, so it needs to be publicly broadcast they are welcome.

“It might be as easy as advertising job openings in Field and Stream,” he said.