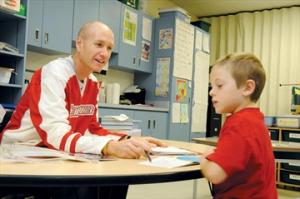 That’s a long way from where he is today – where he’s having not only lots of fun, but also where he’s finding lots of satisfaction.

“It’s neat to take them through (the transition),” said Yahn, noting Grade 1 is a time when youngsters, who enjoyed the play-based kindergarten program, encounter a new reality. They learn to sit and focus for longer periods, do sheets of work, and master the basics of reading and math.

“(They go) from not reading at all and just start to bloom. There’s a huge academic growth. It’s rewarding and it’s challenging.”

Yahn is one of three male primary teachers at West Bayfield Public School in north Barrie. He co-teaches with another man, whose classroom adjoins his. Of the nine in West Bayfield’s primary division, three are men.

The school’s EQAO results don’t show the 10-per cent differential between girls and boys reading and writing that marks the board’s results, but principal Michael Geer isn’t ready to credit the mix of staff.

Still, having a teacher who makes reading fun can encourage boys to jump more enthusiastically into an area where girls typically do better.

“Boys are traditionally a little stronger in math. I try to find books that interest them, be it motorcycles, cars or sports. I try to find language games that would have a sports theme. If you can relate your reading and writing to those things, you might have some more success,” said Yahn, who naturally likes to talk sports – because of his interest not only as a spectator but as a team coach.

He also brings a more physical element to academics, even if those concepts are the most basic taught in Grade 1.

“I bring some science, some technology, lots of phys ed and computer skills. I have an electronics engineering technician diploma,” said the 44-year-old teacher who also brainstorms with his wife, a teacher at Algonquin Ridge Public School in Barrie.  Mary Beth Yahn comes from a long line of teachers – and together, they co-parent their two children, five-year-old Madison and three-year-old Zachary.

But coming to teaching after getting a computer diploma and a phys ed degree, Henry Yahn brings a hands-on approach to learning – which can include a drill press and sandpaper, along with the paints. He also holds a visual arts teaching certification, which adds yet more colour and texture to his lessons.

His classroom and his teaching days aren’t organized any differently than any other Grade 1 classroom – but he definitely has a style that bridges the academic with the practical.

“I may be a bit of an anomaly. I enjoy working with the younger (students),” he said, acknowledging that many male teachers prefer Grades 7 and 8. He enjoys them too – but as a school team coach.

He acknowledges that today, many boys may not have a consistent, positive male role model – and teachers do provide that, in and outside the classroom, in the school community.

He’d encourage other male teachers to try going back to the basics of primary.

“If you’re a younger teacher, I’d encourage you to give it a try. You may find you like it more than you thought,” he said. “We joke that Grade 1 is where all the action is.