on November 28th, 2012 Posted By BG in Articles
By Andrea Castillo — The Macon Telegraph 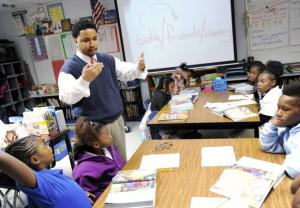 “Mild” and “spicy” aren’t adjectives that Edgar Ray, a fourth-grade teacher at Bruce Elementary School, limits to descriptions of food.

During a recent lesson on synonyms and antonyms, Ray used those words to explain to his students that words with similar meanings can express different ideas.

In one example, he explained to students that “good” is a mild word, while “awesome” is a spicy, more intense word.

Ray, who says he didn’t enjoy school when he was growing up, is one of just four men teaching at Bruce Elementary, which has 26 female teachers on staff.

Barden Elementary also has just four men in the classroom, but some Bibb County elementary schools, such as Jones and Porter elementaries and Alexander II Magnet School, don’t have any, according to school system data.

But having men in front of a class provides plenty of benefits beyond teaching, those in and out of schools say.

“I think having a male figure in the classroom, especially at the elementary schools, is very important,” said Thiago Aleixo, Bibb County’s 2012 Teacher of the Year who taught special needs children at Elam Alexander Academy for several years. “The children relate to you, especially male students.”

Aleixo said students who don’t have a father figure at home or who may have been shuffled among foster homes need a strong male figure in their lives.

Justin Griffitts, a senior majoring in early childhood education at Macon State College, said he wants to make an impact on his students at an early age.

Griffitts grew up with his uncles who lived nearby, but his father was out of the picture. Influenced by one of his high school teachers, Griffitts eventually decided to teach.

“Sometimes boys need to look up to a male role model,” he said. “They need that connection with someone else. I kind of want to provide that.”

While men and women can be a positive influence on their students, male teachers in particular can become father figures for students who don’t have strong men to look up to at home, said Shamani-Jeffrey Shikwambi, an assistant professor at Macon State’s School of Education.

“I don’t think being a male by itself qualifies one to be a … teacher, but I think we need to strive to achieve a diverse, competent and qualified work force that is representative of the children and the families that we serve,” Shikwambi said. “Of course, that representation, that diversity, comes from having both genders at the table.”

While having male teachers in the classroom benefits students, various factors such as pay tend to deter men from entering the field, Shikwambi said.

Men who do teach tend to prefer working in middle and high schools, according to data from a 2011 survey from the U.S. Bureau of Labor Statistics.

Just 2.3 percent of preschool and kindergarten teachers nationwide are men, according to the survey. Men make up 18.3 percent of the country’s elementary and middle school teachers, while they are 42 percent of teachers at middle and high schools.

Coaching school sports becomes an option for teachers as early as the fourth grade, and supervising an extra activity may translate to more income, Shikwambi said.

“Men would rather opt to do that, because you can get an extra $1,000 or whatever makes a difference to their families,” he said.

Another reason men might gravitate toward teaching at the high school level is the opportunity to teach career and technical courses, traditionally fields dominated by men, said Mark Scott, Houston County’s assistant superintendent for human resources.

“In my experience, regardless of gender, a good teacher is a good teacher,” said Scott, who began his 27-year education career teaching heating and air conditioning courses. “I’ve never felt like I was treated differently because I was a male.”

However, male students may be more willing to confide in teachers of the same gender, Scott said.

It also is challenging to hire men when they aren’t graduating with education degrees to begin with, he said.

Houston County Career Academy, for instance, offers courses that allow students to explore teaching as a career option, which could be a way to get more men interested in the field at an earlier age.

“If students can see that, being a male teacher, they may consider that as a career option,” Scott said.

Besides one-on-one interactions with professors, students at Macon State can find support through a college group called Men in Education.

Macon State is not the only local college to reach out to prospective male educators. An initiative at Fort Valley State University that’s called Real Men Teach is aimed at recruiting more black men to teach. “We come together and support each other,” Shikwambi said.

Many men eventually settle into a teaching career after initially pursuing a different career path, possibly because they are pressured to seek a higher-paying job, especially when starting a family, Shikwambi said.

Alfred Brooks, an economics teacher at Northeast High School, is one of those second-career teachers. Brooks worked as a manager for Pep­si in Atlanta before becoming an educator.

“If (the students) get a good, solid education, that can propel them to all levels of success. I think it’s important for them to understand that,” said Brooks, who has been teaching in Bibb for nearly a decade.

He decided he wanted to be in the classroom, despite a pay cut of about $25,000. Brooks said he wants to teach to make a difference in students’ lives, especially those of color who don’t have strong male role models in their lives.

“It’s more of a mission and a way of giving back,” said Brooks, who was raised by his mother in New Jersey.

Like Ray and Brooks, Aleixo didn’t pursue a career in the classroom right away. Aleixo became a paraprofessional at Elam Alexander Academy after earning bachelor’s and master’s degrees in business. Through his experience at Elam, he found he liked working with children and later became a certified teacher.

“I thought I was going to end up in an office during office work, working with a company,” said Aleixo, now the school’s assistant program coordinator. “I never felt that I would be in a classroom as a teacher, especially at the elementary level and with special needs students.”

He said he wants to see more men in the classroom, especially at the elementary level, but thinks societal expectations and pay may keep that number low.

“If the salary would increase, it might attract more males, but again, it’s a gift,” Aleixo said. “Either you have a gift or have the passion to do it, or you realize at a certain age that’s what you’re supposed to.”