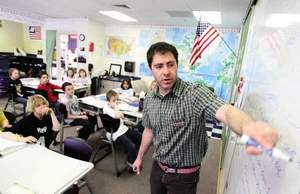 It’s not Cavaliero’s reputation as a wonderful teacher at Brush Creek Elementary that has them excited — it’s his gender.

These kids are immediately intrigued by the novelty of seeing a man in the classroom, a rarity in elementary schools. After preschool, kindergarten, and four years of grade school, most of these students have never had a male teacher before. It’s strange, a little curious, and they ask each other: “What’s it going to be like?”

“It’s something new to them — I’ve kind of gained their interest already, before they walk in,” Cavaliero said.

Cavaliero is quite aware, as most male teachers are, that not too many of his kind exist.

These trends are mirrored in Eagle County Schools, said Jason Glass, human resources director, where there’s fewer than 20 men out of a couple hundred elementary teachers. There are generally more men at the middle and high schools, but still, they’re outnumbered by women.

That’s how it is, but should we worry about it? Why do men stray from becoming teachers, and is there a reason we should hope to find more?

Stereotypes
Will Harris is an especially rare kind of fellow in the education world — the male kindergarten teacher.

At first, parents at Red Sandstone Elementary are a little thrown off, even a little shocked, when they realize a man will be teaching kindergarten, Harris said. Sometimes they’re not sure if he’ll be nurturing enough for their children.

“Society doesn’t see males as being nurturing and caring like females,” Harris said.

Harris’s experience illustrate one of the big cultural blocks to more men becoming teachers. There’s just this perception that teaching — especially younger kids — is naturally a woman’s job, the job of a caregiver. It’s a role that many men aren’t comfortable with taking on.

The stereotype is that men go into education to “teach the subject,” and women enter teaching to nurture and develop children, according to the National Education Association. This is why you’ll find more male teachers in middle school and high school, where it’s thought to be easier to relate to students academically, or as coaches and mentors.

“When they’re older, you can talk about politics or current event in more of a mature way, but at a younger level, there’s a misconception that these kids just need to be taken care of,” Cavaliero said.

There’s also the old fashioned notion that teaching is not a job for the breadwinner of a family. Many men, worried about providing for their own children, quickly dismiss teaching as a low status, low paying job that won’t easily support their family.

“Some of it’s due to money — with the male there’s a perception that I’ve got to be the breadwinner, and it’s hard for them to provide for their family on a teacher’s salary,” Harris said.

Role models
Adam Markert teaches third and fourth grade at Eagle Valley Elementary. Going through college, he was one out of only a handful of men taking elementary education classes. They constantly joked about how, being a man, he was practically guaranteed a job anywhere he wanted.

“I don’t know about the guaranteed the job part, but I know the kids need the male role model at the lower level,” Markert said.

Being a strong role model seems to be on the mind of all male teachers. They’re aware that today, more than ever, many children are growing up without strong father figures in their lives. Having a male teacher at a young age can be a good change and a great influence on many children, Markert said.

“The kids need that other perspective,” Markert said.

In Harris’s experience, after parents get over that initial shock of seeing a male kindergarten teacher, they see that it’s a good thing, he said.

“They see I can be a nurturing person, and that it’s nice to have a male role model,” Harris said.

On a cultural level, Markert feels that we’re heading in a direction where men will feel more comfortable becoming teachers. It’s an age where men and women are changing careers multiple times, trying to find their calling and doing whatever it is that makes them happy.

Hopefully, those men who would be naturally good teachers will follow their instincts, he said.

“They’re saying, ‘I shouldn’t have to be expected to head into the business world or be a doctor,’ and more people will follow their callings, do what they feel they’re supposed to do,” Markert said.

“Adults kind of forget how intelligent elementary aged students are,” Cavaliero said. “They’re still very excited about learning and like coming to school.”

“They’re funny, they do their work, and they’re not sarcastic yet,” Markert said.