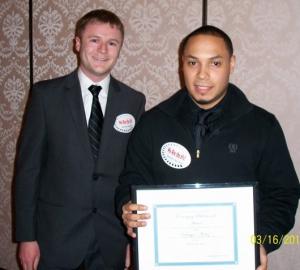 Steve Shuman Award for Support of Men in Early Education and Care
Steve Shuman is a longtime early childhood educator and a pioneer activist on behalf  of men in early education. In his long career he served as teacher, director, college teacher and lecturer, administrator and advocate in Massachusetts and throughout New England. He was awarded the Abigail Eliot Award from the Boston Association for the Education of Young.

Emerging Professional Award
This award was created by MenTeach – New England to recognize and encourage young men who are in the beginning stages of their career as an Early Childhood educator.  The award includes a certificate of recognition and a Comprehensive membership to the National Association for the Education of Young Children.  It is given to a man in the early stages of career development in Early Childhood Education who has shown a commitment to the field through:

Craig Simpson as emcee for the evening