on July 11th, 2012 Posted By BG in Articles
by Chuck Carlson - The Enquirer 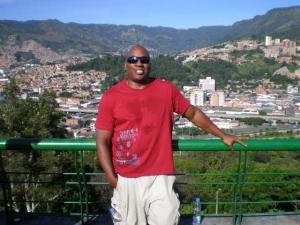 Kevin Hodges has a career that, quite literally, could take him around the world before he’s done.

“It’s unbelievable,” said Hodges, a 1983 Battle Creek Central High grad who waded through his share of uncertainty and frustration before settling on a job that, at least in the United States, is beset by instability and layoffs.

His teaching adventure first took him to China, where he taught English for a year. Then for the last two years he’s taught history in Colombia and is preparing for his third year there. After that, he hopes to teach in Brazil, or maybe Africa, or wherever the need for English-speaking teachers is in the highest demand.

And they are in demand. Countries around the world are paying a lot of money to bring teachers from the United States, Australia, Canada, Great Britain and elsewhere to teach their kids. And Hodges is one of them.

“It’s such an excellent opportunity,” he said.

Ten years ago, teaching was not something he really considered, though he did admit the thought always lingered someplace in the back of his mind.

“I was always told I’d be a really good teacher,” he said.

But after leaving Battle Creek for Pasadena, Calif., Hodges worked full-time and attended the University of Phoenix before he was promoted and sent to Chicago, where he was laid off six months later.

He moved back to California and earned his bachelor’s degree in business management from the University of Phoenix, and then took a job as the school’s call center manager.

He continued going to school, earning his masters in education when, one day in 2007, he read a brochure about teaching abroad.

It changed his life.

Almost before he knew what was happening, he found himself teaching English at Zhejiang Normal University in southeast China. His round-trip airfare, all housing and utilities were covered, and he didn’t need to learn Chinese because, “I was there to teach them English.”

It was the opportunity of a lifetime for Hodges, who in his free time traveled to Malaysia and Hong Kong and Singapore and learned just how different students can be.