on February 15th, 2012 Posted By BG in Articles
by Kristin Kalning 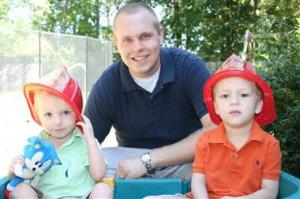 Greg Carroll left his job as an executive chef in 2009, when  his boss asked him to slash his 500-person staff by half. Since then, Carroll has done some catering, some consulting and some cooking in private homes. But full-time work has proven elusive.

So a few months ago, the 51-year-old Carroll posted an ad on Care.com, a site that pairs caregivers with potential employers. As a divorced father of four, he’s changed diapers, coached soccer and cooked healthy meals for his family. “I’m a great dad … so I thought (child care) might be something to look at.”

Carroll is part of a growing trend of men turning to child care work as a way to earn money in a difficult economy. Candi Wingate,  president of the Norfolk, Neb.-based Nannies4Hire.com, estimates she’s seen a 10 percent jump in men looking for childcare work since the economy turned south. Johanna Flattery, with Care.com, said men advertising for child care jobs on the site has risen more than 30 percent since October 2008.

Some of these men are unemployed teachers, or daycare workers looking to go the “manny route.” Some are dads, like Carroll, with plenty of real-world experience but no formal background in caring for other people’s kids. And some have virtually no child care experience, but hope someone might give them a shot, anyway.

The overwhelming majority of nannies and babysitters in the U.S. are women, and plenty of potential employers reflexively shy away from hiring men to care for their kids. Child care is still considered by many to be a “woman’s job,” and parents may wonder why a guy would want to warm bottles, wipe up snot and play with Webkinz.

There are plenty of reasons why families would want to hire a man to watch their kids, said Flattery. “Anecdotally, we’ve seen a lot of mothers with pre-teen boys and teenagers who tend to pursue a male care provider. The reasons have been because these men can ‘keep up with’ the boys and participate in activities.” And single moms with male children often seek out men as care givers because they want a male role model for their sons.

Travis McGowin, a firefighter and part-time “manny” from Prattville, Ala., started working with children at a local YMCA and kept on doing child care throughout fire school.

“I do continue to do this for the extra income, especially because of the way the economy has gone in the past few years,” said McGowin. But he also just loves working with kids.

“Kids accept people for who they are, instead of superficial things. If you have a genuine interest in what they’re doing, they’re going to be interested in you. If you show them love and interest, they’ll love you,” explained McGowin. “Kids have this whole unconditional love thing, and that’s what kept me in it the longest, more so than the money, actually.”

Have you noticed more men getting into child care? And would you hire a man to care for your children?