on December 4th, 2011 Posted By BG in Articles
by NewsMail 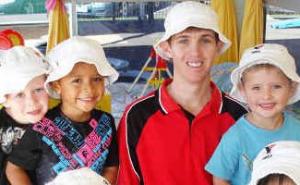 Trent Tootell may be the minority in his chosen career but he has made a difference in children’s lives.

Mr Tootell is completing a Diploma of Children’s Services while working at the Bundaberg’s City Y Childcare Centre.

Women generally dominate in his field, with men scarce in the childcare industry.

Mr Tootell has worked in the industry for five years and said a careers teacher prompted him into the profession after he completed a personality survey.

“I wasn’t sure what I wanted to do then but was open to options and the survey results showed I was suited to working with young children or the elderly, so I settled on child care,” Mr Tootell said.

“In the beginning I had mixed feelings about being the only male on the job, and often felt lonely and insecure, but I was lucky to receive great support from the centre director.

“Now I feel perfectly comfortable because I’ve come to realise that the first five years are extremely important in a young child’s life and I’m not just a baby-sitter but, in fact, I’m playing a really important role.”

The Children’s Services team at the Wide Bay TAFE believes children need men they can talk to and feel safe with.

They are hoping to see more males join their vocation.

Bundaberg campus teacher Jade Pilkington said it was still rare to see men working in childcare, and they often felt like the odd one out in the under fives playground.

“Some children from single parent families may need a positive male role model in their lives and that person could well be their male educator,” Mr Pilkington said.

“Men working in early childhood education are superheroes because they can respond in a caring manner or just be fun to be around and children gain enormously from this.”

He believed in moving with the times and said there were good supporting reasons to make changes.

A networking group of students has formed at the Bundaberg TAFE campus to provide support and find ways to improve the balance of males and females in the industry.