on February 6th, 2013 Posted By BG in Articles
By Graeme Paton, Education Editor - The Telegraph 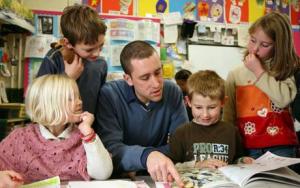 The early years workforce is still skewed dramatically towards women as a result of deeply ingrained gender stereotypes combined with fears that men will be falsely labelled as paedophiles, it is claimed.

Research by Nottingham Trent and Bedfordshire universities found that most male teachers were confident working with children aged seven or under and insisted gender was “not an issue”.

But the study suggested that a “number of consistent stereotypes and barriers” stopped many men entering the profession in the first place.

The conclusions follow the publication of figures showing that around a quarter of primary schools in England – 4,500 – are staffed entirely by women.

In all, men present just 12 per cent of the primary school workforce, while just three per cent of teachers in state nurseries are male, it was revealed.

It is feared that a lack of exposure to male role models in the early years can undermine boys’ education, leaving them lagging further behind girls.

Researchers recommended that male students should be encouraged to undertake work placements in primary schools – under the leadership of an existing male head teacher – to give them a positive experience of working with young children.

“Stereotypes, perceived or real, of gender inequality, homophobia or identity need to be challenged and addressed.”

The study – published in Education 3-13: International Journal of Primary, Elementary and Early Years Education – was based on in depth interviews with 18 men taking primary teacher training courses and 13 male head teachers.

Researchers found student teachers shared common stereotypes about the reasons that men are preventing from going into primary school classrooms.

One student training to teach six and seven-year-olds said: “Early years teaching is viewed as a woman’s profession and as a nurturing stage, and females are viewed as more nurturing than males”.

Another trainee it was difficult for men to work in primary schools because they felt like “outsiders”.

One said: “Men are perceived as intimidating [or] threatening to some early years children.”

The study will fuel concerns that a lack of male primary school teachers may have a negative impact on boys’ education.

Commenting on the findings, Tom Bunbury, headmaster of Papplewick School, a boys’ preparatory school in Ascot, said: “There is no doubt that boys work in a different way to girls. Girls seem to be more compliant and will take part in a lesson come what may, whereas boys will be extremely fidgety unless they are genuinely inspired by what’s in front of them.

“Boys need, in a sense, these inspirational role models teaching them in a way that’s very dynamic and energetic and that often comes from males simply because that’s the more natural way for them to teach.”