on June 1st, 2010 Posted By BG in Articles
by Samantha Cleaver - Scholastic 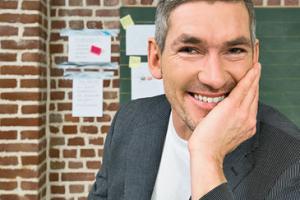 After 26 years teaching elementary school, Tom White, a third-grade teacher at Lynnwood Elementary School in Lynnwood, Washington, doesn’t give too much thought to the gender imbalance in the teacher’s lounge-even though he is one of only five male teachers. What are the differences? Not surprisingly, says White, he is assigned more students who might be in need of a male role model.

“Once in a while, you look at your class list and the list of the gal down the hall and think, ‘I have more troublemakers,'” he says. On the other hand, he thinks parents are easier on him than they are on the female third-grade teacher. Are parents’ expectations lower, or are they just less likely to argue with a male teacher? Tom White isn’t sure, but he does know that parents are often surprised to meet him on the first day.

Education’s Gender Gap
According to a 2006 National Education Association survey, about 25 percent of public school teachers are male, a figure that’s decreased since 1970, when 32.8 percent of teachers were male.

Bryan Nelson, president of Men Teach, an organization committed to increasing the number of men in primary education, thinks the percentage of men in classrooms may increase in the near future. The combination of a recession that’s affected men disproportionately, along with the current G.I. Bill and organizations like Troops to Teachers, thinks Nelson, may encourage more men to consider careers in education. But other experts disagree.

Why Don’t Men Teach?
Many young men don’t consider teaching as a career, or if they do, they veer toward high school, not early childhood or elementary. Salary does matter-the 2006 NEA survey noted that those states with the highest salaries had the highest percentage of male teachers-but it’s not the only factor.

In elementary education, there’s a perception that teaching kids to read is more play than challenge. “Many people think that the intellectual content that it takes to be a high school teacher is higher,” says Valora Washington, president of the Community Advocates for Young Learners (CAYL) Institute in Cambridge, Massachusetts, and that “you don’t have to be that smart to be an elementary school teacher.”

School culture can reenforce primary education’s woman-centered image: The magazines in the teachers’ lounge, the pictures on the wall showing men in suits (administrators) and women working with kids, and the curriculum of activities that appeal more to girls than boys give the impression that men don’t have a place here. “The guys that I know who teach elementary school talk about needing to adapt to a seriously female-dominated society,” says Jeanne Harmon, director of the Center for Strengthening the Teaching Profession (CSTP) in Washington state. “For a lot of men it’s not what they’re used to.”

Finally, in society, the perception that men are not nurturing and shouldn’t work with young children still exists. Young men considering teaching, says Washington, are concerned about potential abuse allegations and that they might be seen as pedophiles, even for accepting hugs or comforting kids. This, along with other prejudices that too often come along with the job, can wear male teachers out and push them into administration-or out of the field.

Boys benefit from having male teachers, however, especially in elementary school. “Boys tend to have more challenges around their achievement, and around their reading and their behavior,” says Washington. “We believe that if elementary schools had more male and female role models, then the environment would be more gender neutral as opposed to more feminized.” There may also be an academic benefit. “There are some studies that show that fifth- and sixth-grade boys do better in literacy if the teacher is male,” says Nelson of Men Teach. Research has also shown that males had a more positive experience if they had male teachers.

Inviting more men into education also increases staff diversity. “If we had diversity in our workforce,” says Just Holm, preschool manager with the City of Cambridge, “it would naturally create diversity in the activities and curriculum.” This would create an environment in which both genders could succeed.

Welcoming the Guys
A few changes in how schools approach hiring can make a big difference for kids and the community in the long run.

Recruit: To increase the number of men, work with universities and alternative programs, like Troops to Teachers, and advertise on mainstream job websites to recruit a greater balance overall.

Create a Future Pipeline: Each summer, Holm arranges work opportunities in the city’s preschools and day-care centers for high school-age boys to give them the experience of working with young kids. Work with your district and local schools to give young men a chance to experience education before they make their career choice.

Mentor Men: Establish teacher groups with some balance of, even if the teams need to be multi-grade, or even multi-school.

Teach Women: Holm has also started training female staff about what it’s like to be a man in early childhood education, and how classrooms and schools might be too woman-centric. “I was amazed,” he says, “at how little women knew about men.”