on April 1st, 2018 Posted By BG in Articles
by Edward Van Embden - The Current 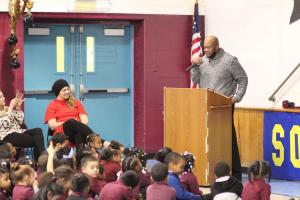 Each year, South Main Street Elementary School gathers its students for a special assembly celebrating both poetry and the male members of its teaching staff.

With special introductions for each teacher that highlight the teachers’ accomplishments and delve into their personalities outside of school, the men took turns at the mic reading poems they’d selected, focusing not only on themes of empowerment and self-determination but also fun and a smidge of whimsy.

“When the teachers choose their poems, they have creative control over which ones they pick. We have some teachers that always choose inspirational poems, but it’s always up to them,” technology teacher and men’s poetry assembly organizer Erika Smalls said. “I think (the teachers) look forward to it. They get excited.”

One by one, the male teachers took to the podium to cheers from the students. Some poems were serious. Some long. Some light and short. Shel Silverstein and Walter D. Wintle were some of the poets introduced to students.

Raymond Frazier, a fifth-grade teacher at the school, said the assembly provides teachers the opportunity to express themselves and their ideas in a way that’s different from their daily classroom activities.

For his poem, Frazier chose “More than a Number,” written by Barry Lane. The poem is about individuality, recognizing students for who they are and what they’re capable of in school and their lives, beyond standardized test scores. A teacher who is also an active musician and once moonlighted as a part of Philadelphia’s slam poetry scene, Frazier said it’s important for students to be able to recognize there’s more to life.

“It’s meaningful to me, just to be able to say something, to give kids the freedom to be who they are without the pressure of standardized tests,” he said. “They receive (poetry), they understand it and they definitely relate to it.”

Nicholas Kershaw, a recent Stockton University graduate who is student teaching at the school, read the Wintle poem “Thinking.” If you think you’re beaten, he told the students, you are. But, in order to rise, like the poem says, you’ve got to think high.

“I want you all to visualize what you can be if you believe in yourselves,” he told the students following his reading.

As to why the school chose to have their teachers read poetry, Smalls said it’s a literary form the children might not always be familiar with, or one they already love without even knowing it.

Before the assembly began, Smalls didn’t ask students whether they knew Walt Whitman or Robert Frost, but J Cole and Kendrick Lamar. Different style, different eras, but fundamentally, poetry is poetry, she said.

“The main importance is just the exposure to different art forms. You’ll have kids who don’t realize that little song they’re writing, that little rap they’re doing for their friends is actually poetry,” she said. “They love it, but they don’t associate it with poetry, so we try to put it out there that it is still art, that it is still poetry.”