on July 29th, 2018 Posted By BG in Articles
By Manny Ramos - Chicago Sun-Times 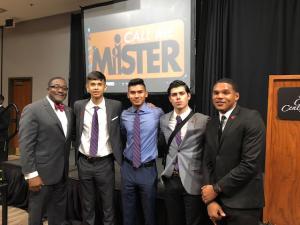 Jawaun Williams always felt a void growing up on the South Side, going to schools with a predominantly black student population.

When he graduated from high school, he was one of the top 15 students in his class and in the honors society.

Still, something was missing.

“I’ve never had the opportunity to be taught by someone who looked like me. I never had any male black teachers,” Williams pointed out.

“I’ve only had one black teacher in my life. It was something I was used to, but as I’ve grown older, I realized that it is pretty weird that black men weren’t in my field.”

Though he wasn’t taught by many black men, Williams saw how influential educators could be in a young person’s life.

“Teachers taught me how to navigate, not only high school, but life. That was one of the reasons why I wanted to become a teacher.” the 19-year-old said.

Williams, a college sophomore, is one of six participants at the University of Illinois at Chicago’s “Call Me MISTER” program that aims to introduce more black and Latino male teachers into the Chicago Public School system.

This is the first year UIC is participating in the program, which stands for Mentors Instructing Students Toward Effective Role Models.”

“Call Me MISTER” started at Clemson University in 2000 and is operating in 31 schools. UIC is the first large urban school participating.

“As soon as I graduate I want to go back to the South Side of Chicago, and teach in the same neighborhood I came out of,” Williams said.

Williams and others in the “Call Me MISTER” program were recruited at schools with a majority black or Latino student population. They will receive full tuition and room and board.

The program can stress to young men and boys that teaching is not a female-only profession, said Alfred Tatum, UIC’s dean of College of Education

In a report produced last year, matching black male students with black teachers can have a positive impact on the student. Black students perform better on standardized tests and face favorable teacher perception. It can also increase the likelihood of low-income students aspiring to attend a four-year college and reduce the probability of them dropping out of high school.

“The research is clear, there are benefits with having teachers who look like you,” Tatum said. “Our boys in the city need to see men of color who embrace teaching as a profession.”

Manny Ramos is a corps member in Report for America, a not-for-profit journalism program that aims to bolster Sun-Times coverage of issues affecting Chicago’s South and West sides.