on April 30th, 2010 Posted By BG in Articles
by Katie Janssen - Keoland Televsion 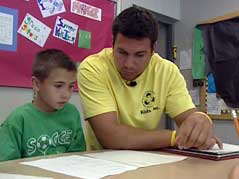 As school teachers prepare to return to the classroom, many with new teaching degrees are having a hard time finding jobs.

Andy Middlen graduated from Augustana College in May and now helps with the Sioux Falls School District’s Kids Inc. summer program.  It’s a temporary fix for a problem that has no easy solution.

“My professors tell me you’re lucky to get an interview is what it’s come down to. Hearing that, wow, it’s tough out there,” Middlen said.

Middlen says out of his graduating class of about 20, only five people have gotten teaching jobs so far. And it’s not just recent grads crowding the job market; more retired teachers are returning to the classroom.

Middlen’s had four interviews, three in Sioux Falls and one in the Lennox School District and nothing’s panned out yet. But he’s staying hopeful.

“There should be more openings in August and I’m going to keep trying, and if not, I’ll sub for a year,” Middlen said.

Kids are his passion and Middlen’s not about to give up on his dream of teaching.

When Middlen began studying to be a teacher, he was told he had the upper hand because there was a high demand for male teachers.Go to website to watch a video.