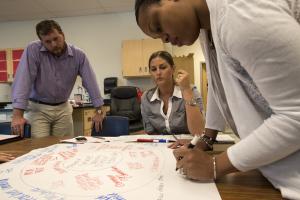 Along with the hundreds of thousands of students heading back to school across the region this week and next, there are hundreds of new teachers, some of them leading a classroom for the first time.

And some of those teachers are just as nervous as the students.

Bryan Curtis, who starts his first teaching job at Greenbelt Middle School in Prince George’s County when school opens Tuesday morning, has been preoccupied for weeks. Questions have been replaying in his mind: How should I manage my classroom? What’s the best way to communicate with parents?

But his anxiety was somewhat relieved when many of his concerns were addressed during the county school system’s annual “professional educator induction program,” a three-day boot camp intended to prepare 800 educators for class this year.

As the start of school approached, thousands of teachers across the region participated in such programs, learning about teaching practices, how they will be evaluated and new academic standards.

In Fairfax County, where school opens Sept. 2, more than 1,100 teachers gathered at South County High School for the administration’s Great Beginnings program. Among them were ­
18 of the county’s newest kindergarten teachers, all in their first year.

“Overall, I think they prepared us as much as possible,” Asselin said. “But nothing can prepare you really when there’s 18 little children there staring back at you with innocent eyes.”

Asselin said she is nervously excited for the first day of classes. It will be the day she’s been waiting for since she was a little girl teaching addition with a dry-erase board to her collection of stuffed bears and dolls.

“It’s just as nerve-racking for a teacher the night before school,” said Asselin, 23, who will start her career at Riverside Elementary near Alexandria. “You go in with the exact same butterflies that they are feeling. Will they like me as a teacher? Will they think I’m mean? There’s a lot running through your head that day.”

At Henry A. Wise Jr. High School in Upper Marlboro, Md., some new teachers spent their final day of the program acting as students in classes with the district’s experienced teachers.

Jennifer Murray, who taught in Maryland’s Anne Arundel County, for five years, said she had never gone through a similar training exercise. “It’s appreciated,” said Murray, who worked with a group of teachers in a strings seminar, plucking notes on a cello.

During a science class exercise, new teachers were tasked with creating a “ring of truth,” writing down facts and misconceptions about a subject. Some focused on science education. Curtis’s group dealt with the county’s schools.

“There is a misconception that we have bad kids,” said Curtis, who was a student teacher at Greenbelt Middle last year. “They think that the kids are not motivated. If we build relationships with our kids, they are going to learn.”

Curtis said he was surprised by the number of teachers who were participating in the program.

“It makes you wonder: Are people leaving or have they created new positions?” he said. “I haven’t looked into that. But I’m just glad to see how everybody is excited.”

In Fairfax, the vast majority of new recruits are female. All 18 of the county’s first-year teachers at Great Beginnings were women.

Helping to introduce new teachers to Fairfax’s practices was Ellen Keyser, who has taught for 23 years in county kindergarten classrooms, longer than some of the new teachers have been alive.

“This will be the hardest job you’ll ever love,” Keyser told the group. “There will be times when you’re tired, and that’s okay. We’ve all had the highs and lows.”

She has served as a Great Beginnings instructor for the past 14 years and said she looks forward each summer to passing on her wisdom to a younger generation of educators.

“We told them that your students are not going to remember what you taught them, but they are always going to know how you made them feel,” said Keyser, who will begin her 20th year at Aldrin Elementary this fall. “It’s those relationships you build with students that are so important.”

Maura Burke, a Fairfax instructional services coordinator, explained that students’ relationships with their kindergarten teachers can be an indicator of later academic performance.