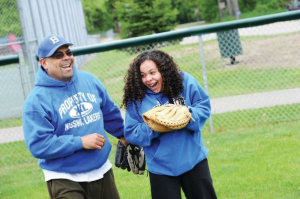 Bill Cruz is not your average student.

In fact, he’s the exact opposite of the 19-year-old white woman that typically sits in the desk of Jeanette Rydberg’s early childhood classes.

At 47, Cruz is the second man in two decades to graduate from Central Lakes College’s Early Childhood AAS program at the Brainerd campus.

That’s something both he and Rydberg want to change.

“I want to break that stereotype,” he said. “I can be just as loving and nurturing as a female.”

The Nisswa resident didn’t always have such high hopes.

Growing up on the streets of Philadelphia, where the life of drugs and gang activity were “cool,” Cruz was headed down the wrong path.

That all changed when Cruz was 15. He was placed in a group home because he was “a street kid.”

He started attending a Catholic school and quickly figured out school would get him out of that “gangster wannabe” lifestyle, that education could change his life.

In the next several years, Cruz played many roles.

In Seattle, he operated a group home for at-risk youth, preparing them for independent living. With five children, he later became a stay-at-home father.

He and his wife moved to Nisswa in 2007 to be closer to her family.

When his youngest child entered pre-school, Cruz went along. The youngster could be “quite a handful,” so he acted as a parent volunteer.

He worked as a paraprofessional in Nisswa until 2011. It was there he discovered his passion for early education.

In 2011, Cruz quit his paraprofessional job so he could make an even bigger change. He would go back to school.

On his first day in his first class at CLC, Cruz realized he was in the minority. His classmates were young and female.

Cruz was a little rusty at first. He hadn’t been a student for more than two decades. Soon, he was on the honor roll.

He’s raised children. He’s been in the classroom on a professional level already.

“As an instructor, it changed my instructing,” she said. “Discussion and approaching subjects was different. He was a positive aspect.”

So why the low count when it comes to men in early childhood education classes?

It’s often a low-paying field and viewed as female dominated, Rydberg said. The guys are typically found in the middle and high school level.

Rydberg doesn’t see a rush of men joining the field any time soon, but she hopes more will consider it. Having men in the early childhood education field is vital, she said.

“It’s a better representation of our world. It provides a good model for children to see men and women can be respected, nurturing and caring,” she said.

When Cruz gets in front of a group of children, he’s the person the little boys can relate to, Rydberg said. He’s practical and not afraid to get into the “rough and tumble play” that some of the women generally steer away from.

Still, he offers that gentle side.

“It’s great a guy can be seen in a nurturing role. It’s nice for kids to see a guy can do that,” she said.

That male figure often isn’t represented in the school system during the early years, Cruz said.

“I want more men in (early childhood education),” he said. “There are men out there who want to be educators. I want men to be represented.”

Cruz will get his associate of arts degree in December. Eventually, he wants to be a second- or third-grade teacher.

He wants to help children enjoy education. Cruz wants to be that early influence.

“I’ll be the guy who advocates for children,” he said. “Always.”