on April 24th, 2015 Posted By BG in Articles
By Danielle Brody - Westfair Communications 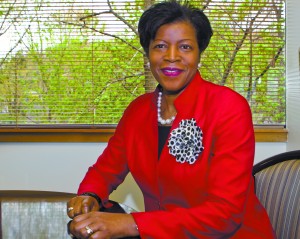 In her 20 years as CEO of Today’s Students, Tomorrow’s Teachers, Bettye H. Perkins has seen hundreds of ninth-graders return to their schools as teachers after completing the nonprofit’s mentorship and training program.

The mission of the White Plains-based nonprofit is to fill the diversity gap in the teaching profession by training culturally diverse and economically disadvantaged students from ninth grade through college to become teachers. Schools of all sizes are becoming increasingly diverse, yet nationally, 13 percent of teachers are of color, Perkins said.

“We have a lot of work to do to try to find role models to match our growing diverse student population,” Perkins said.

Perkins started the nonprofit in 1994 in Westchester with a cohort of seven students in Ossining High School. The program has expanded to more than 800 students throughout New York, Connecticut, Massachusetts and Virginia. More than 110 graduates have become teachers in their communities.

The nonprofit recruits ninth-graders who have good attendance, a C or higher grade average and teacher recommendations to join the eight-year program. The school districts often pay for students to participate in the program, she said. If not, businesses, government or foundations fund their involvement.

Throughout high school, participants are paired with a mentor and receive opportunities to help with classes and tutor.

“They’re involved with some aspect of some teaching-related assignment almost all year long,” Perkins said. “They really know by the time they reach the 12th grade whether or not they want to be a teacher.”

Involvement in the program shows students a career path, Perkins said. They also receive leadership training and most students’ grades improve, she said.

“They’re motivated by the fact that they feel valued. They feel like they’re somebody.”

One of the biggest incentives of the program is students can receive a minimum 50 percent tuition scholarship to one of 23 schools, including Pace University, Manhattanville College and the College of New Rochelle.

Perkins said most of the students in the program are economically challenged, and because of their environment, families or finances, do not expect to go to college. About 77 percent of participants graduate from college compared with a national average of 25 percent for students of color, Perkins said. Many of them are the first in their families to go to college.

Emerly Martinez, the assistant principal of Fox Lane High School, was not planning on going to college before he joined the first cohort of students at Ossining High School nearly 20 years ago. A son of immigrant parents, he had already enlisted in the Army. He ended up backing out to go to Mercy College, where he had a mentor and received support from Today’s Students, Tomorrow’s Teachers.

“If it wasn’t for having those connections and having Dr. Perkins to call and turn to when things were getting tough in college, I know I wouldn’t have completed it,” he said.

The support and mentorship in college is more important for students than the scholarship, Perkins said. “If they don’t get the proper counseling and guidance and mentoring they can fail out of college; it doesn’t matter if they have a scholarship or not,” Perkins said. “That is the reason we have such great results in this program.”

When the students become teachers in the schools they once attended, they serve as role models for the student body and the respective communities.

“They are integrated into the fabric of the community and they are making a huge impact on not only the kids that they teach but the students and children that go to that school because they now live in that community,” Perkins said.

About 90 percent of the nonprofit’s graduates are still teaching after five years, Perkins said, compared with the national rate of 50 percent. Graduates have gone to get doctorate degrees, become mentors or administrators, like Martinez. Perkins speaks with pride about Martinez, who along with other graduates of the program who have become teachers will receive honors at the nonprofit’s annual recognition breakfast April 29 at the DoubleTree in Tarrytown.

At the event, Perkins said she will announce the expansion of its male teacher initiative in Westchester, which it piloted in the Rochester City School District four years ago. She said she wants to start with a group of 50 in Westchester.

Nationally, there are about 12 percent male teachers, and 2 percent are of color, Perkins said. She said that male minority students’ high suspension and prison rates are reasons “we really need to have role models of color in the classroom so that we can begin to get our male students on a better academic track.”

Martinez said while all teachers try to instill in their students that college and a career are possible, a teacher that looks like the students serves as proof, which can be inspiring.

About the author
Danielle Brody is a reporter for the Westchester County Business Journal covering county government, education, nonprofits, retail and more. She has written for the Journal News, the Scarsdale Inquirer and the Newark Post. Danielle is a graduate of the University of Delaware.