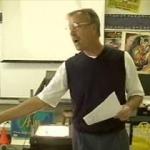 School districts across the nation are on the prowl for a few good men because the number of male public school teachers has hit a 40-year low.

Men represent about a quarter of teachers nationwide, which is why colleges are taking a stronger approach to recruit men to major in education.

Franklin Elementary School teacher Robert Eldredge said it takes a special someone to be an educator.

But he said the hard work, modest pay and long hours are worth it for what he receives.

“I am a father figure for a lot of kids that don’t have fathers, so I’m kind of the person who tells them when they’re not supposed to be doing something from a fatherly way that they hadn’t been told before,” Eldredge said.

Districts across the U.S. are experiencing a downward trend in the number of male teachers.

Eldredge can only speculate why.

“I would guess that it’s the pay, first of all, that males probably are supporting their family and we don’t get paid what a lot of people think we should get paid,” he said.

To many of his students, Eldredge is their first male teacher.

“I used to try to slick by and slide with work that I do. Here I get scared and I don’t like doing that,” said Joe West, 11.

According to men teach, programs and incentives for male teachers are paying off.

But if the Bakersfield City School District is any indication, local educators said luring men is not a priority.

“In the district, we look to hire the most qualified teachers and, in fact, we can’t take into effect their gender,” said Steve Gabbitas, BCSD.