on April 26th, 2011 Posted By BG in Articles
by Sarah Harris - Mail Online 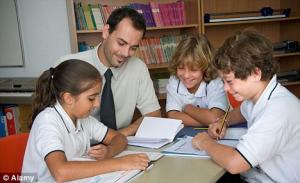 It is a profession which has been dominated by women for generations. But now it appears many more men want to become primary school teachers.

The surge of applicants for training courses is being put down to the economic downturn and rising unemployment making the job more attractive.

Traditionally, there has been a ratio of four female teachers to every male in primaries.

A steady decline in the number of men wanting to teach children aged four to 11 has traditionally been blamed on the lower salary potential and, more recently, on a fear of being labelled as paedophiles. This has left thousands of boys at risk of having no male role models if they have none at home and all their teachers are female.

Rising joblessness, however, has made the prospect of working in primary schools more attractive, according to the Training and Development Agency for Schools.

Chief executive Graham Holley said: ‘It is a profession with increasing status that is becoming more and more competitive.

‘There has been a sharp rise in applications to teacher training from people working in other professions. They recognise that teaching can fulfil their ambitions, provide challenges and offer rewards such as a competitive salary and greater opportunities for career progression.’

Last year, the General Teaching Council revealed that the 25,491 men who teach in primaries make up just 13 per cent of the total. And there are just 43 male staff in state nursery schools. The dearth of men in the classroom has left 4,550 state primaries out of 16,892 – or 27 per cent – with no male teachers.

Overall, only a quarter of the 490,981 registered working teachers are men, with most in secondary schools and further education.

Professor Alan Smithers, head of the Centre for Education and Employment Research at Buckingham University, said the TDA figures were a ‘small step’ in the right direction.

He added: ‘I wonder how much is due to lack of opportunities elsewhere and how much to a genuine desire to be in the classroom.’

The number of schools judged as ‘inadequate’ has almost doubled under new inspection rules, Ofsted has revealed.

Around one in 13 do not provide high enough standards, said the watchdog, while the number hailed as ‘outstanding’ has halved to fewer than 10 per cent of reports.

The watchdog said expectations of schools have been ‘raised’ under the overhauled regime introduced last September.

The rules mean inspectors spend twice as long monitoring lessons, more emphasis is put on exam results and schools are given only one or two days’ notice of checks.