on October 29th, 2015 Posted By BG in Articles
by Jeff Piorkowski, special to Sun News 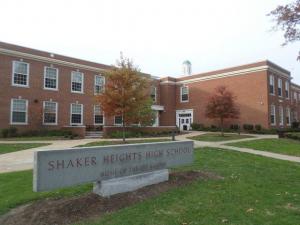 Shaker Heights Schools, working together with the U.S. Department of Education and Howard University is looking to launch a program to attract African-American male teachers to the district.

The African-American Male Teacher Initiative was discussed Tuesday night while the Shaker Heights Board of Education and school administrators reviewed the progress of the district’s strategic master plan in the second-floor cafeteria at Shaker Heights High School.

Assistant Superintendent of Business and Operations Stephen Wilkins mentioned the program, which seeks to solve the problem of a shortage of teachers of color, while going over progress made on goals pertaining to the Human Resources and Facilities portion of the strategic plan.

Wilkins said the district’s human resources department filled more than 100 positions before the current school year, but said the hiring of African-American teachers remains a challenge for Shaker Heights and other school districts.

“We are working with the U.S. Department of Education and Howard University to develop a plan to target the recruitment of African-American teachers to work in Shaker Heights,” Wilkins said.

Superintendent Dr. Gregory C. Hutchings, Jr., said the idea came about when he took part in January in the “Our Students, Our Leaders” initiative meeting held by U.S. Department of Education Director Arne Duncan and school leaders from around the country.

If developed as planned, Wilkins said, the initiative would be unique to Shaker Heights.

“We want to start with six-eight candidates for the first cohort,” Hutchings said. “We would start in the summer of 2017.”

Each of the candidates Shaker Heights would take on would have already earned their master’s degree from Howard University.

“This is part of our strategic plan,” Hutchings said, speaking of the five-year plan’s goal to “recruit and retain high-quality staff with diverse cultural experiences and backgrounds.”

“We would provide a one-year fellowship in which (the teaching candidates) would live here in Shaker Heights,” Hutchings said. “At the end of one year, we would offer them a five-year teaching contract. During the second year, they will start a doctoral program.”

“The goal is to keep them in Shaker Heights and make them a part of the community,” Hutchings said.

The Superintendent hopes that the teachers Shaker Heights Schools hires will then visit Howard University, tell of the program, and keep open the pipeline of black teachers to the district.

School Board member Reuben Harris, in asking a question of Wilkins, said that in the past six or seven years, the percentage of black teachers in the district has decreased from 23 percent, to 12 percent.

After the meeting, Hutchings and Wilkins said they did not immediately have information as to the correct percentage but, the Superintendent added, “I do know that it is a challenge to find African-American teachers, or teachers of color.”

Hutchings said he is going to pitch the plan to the U.S. Department of Education when he meets with its representatives again next year.

As for the strategic plan, it is in its second school year of implementation. Board members heard positive things about various aspects of the plan.

“Year one was really about investigation,” Hutchings said, “gathering data and looking at the culture in our schools.

“Year two, we’re focusing on where do we go.  It’s more rolling up our sleeves and taking action steps.”

The plan features teachers at various schools instructing and collaborating with their fellow teachers. It also involves different approaches to learning being taken at different schools to avoid “a cookie-cutter”mentality in achieving goals.

During the meeting, Executive Director of Public Relations and Communications Scott Stephens said work will take place to improve and modernize the district’s website. He also said smart phone apps that would allow for virtual tours of schools for prospective students might also soon be available.

Further, text messaging to parents of announcements, such as the cancellation of school due to bad weather, is on the way.

“I hope to have that up and running before snow starts to fall,” he said.

The strategic plan’s goal for communications is to “engage parents and other community stakeholders as active partners.”

Also in the area of communications, the first meeting was recently held of the schools’ Communications Advisory Counsel, made up of local professional public relations and media professionals.

The next strategic plan update is scheduled for January.