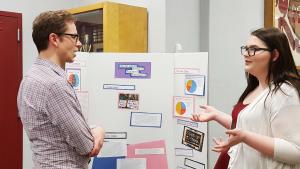 The class, in its third year, is part of Eastern Oregon University’s OTP curriculum. The program is intended to entice high school and college students into considering a career in education.

The goal is two-pronged: add ethnic and linguistic diversity to the teacher workforce, and restock rural district staff rosters with homegrown teachers.

The Mac-Hi students had chosen a range of topics, from how athletics strengthens grades to whether mental illness affects students attendance, to overcoming racial and social obstacles through art.

“The breadth of their research was enormous,” Ashland told an audience of parents and other educators Monday evening.

All the better to prepare this handful of students for work that lies ahead in college. Some of these and other OTP students in the region will enroll in EOU’s Multidisciplinary Studies & Elementary Education program next fall.

Research shows about one-third of Oregon public school students are ethnically and linguistically diverse, but most teachers for them are white females, she said.

The OTP program was written to shake up that equation as studies show students of color have higher academic success when exposed to teachers who look like them.

A study of 100,000 black students in North Carolina over many years was released in March by the IZA Institute of Labor Economics and cited in numerous media reports. It showed that assigning an African-American male teacher to male African American students cuts high school dropout rates and raises college aspirations.

Student demographics are changing in Oregon and the nation. When children have teachers who look like them and understand their culture, they do better in school for longer, even into college.

“That gives them a constant connection back to their home school,” said Lubbes, a La Grande native. “Rural schools can grow teachers who will come back.”

To address the issues she saw, Lubbes helped write a grant proposal to Oregon’s Department of Education. That came through in 2013, giving her and her team about a year to get the program up and running. The state gave one grant of $178,000; the college and partnering school districts now sustain the program.

That includes a tuition rate of $45 for what is typically $135 per credit, plus a waived application fee for OTP students, she said.

The program started small; so far 16 students from around the region have entered the program at the college level. That number is supposed to double with fall’s enrollment, Lubbes said.

Incoming students feel reassured when they arrive and again see the college students who mentored them at their former high school.

This year, for example, 2016 Mac-Hi graduates Abi Biggs, Jose Abrego and Samuel Miller have returned to visit their younger OTP peers five times during the school year. They were there again Monday night to cheer on the presenters.

Those still in high school are finding the work that program demands is preparing them for future academic success, Lubbes added.

Ashland’s class, for example, is got a taste of classroom leadership and the extensive prep work required by has spending some of the year creating and teaching weekly lesson plans for Umatilla-Morrow Head Start children.

Lubbes said she has seen firsthand how the work done in high school foretells what happens when students hit the EOU campus.

“The transformation that occurs, the accountability and professionalism … they are drastically different than the standard freshman,” she said. “When they come to college, they are better students and communicators.

“And someday, better teachers who will transform our educational system.”