on January 31st, 2017 Posted By BG in Articles
By Alejandra Matos - Washington Post 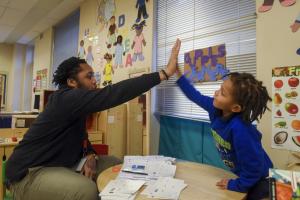 Sekani Malcolm was serving coffee and pastries at Dunkin’ Donuts last month, a 20-year-old high school graduate with no plans to go to college and few aspirations for a solid career. He had struggled in school, where he sometimes found trouble, and he was working the part-time job to help support his 3-month-old daughter.

Like many D.C. Public Schools alumni who don’t consider college an option, he didn’t have clear ideas for his future. Then, in January, he went back to preschool.

Malcolm and nine other recent minority graduates have returned to classrooms this school year as literary coaches, teaching preschoolers to read and learn alliteration and rhyming, part of a program that aims to give recent black and Latino male graduates teaching experience. Schools officials hope the program will inspire the young men to become teachers, as many urban school systems face a critical shortage of minority male educators, who many experts believe can be the best role models for young minority boys.

The Leading Men Fellowship is one aspect of the city’s push to better serve its minority male population, a group of students who lag far behind their peers in the public schools. The program puts the recent graduates to work in a steady job, could create a seed of ambition and serves the city’s youngest students.

Malcolm, an Eastern Senior High School graduate, reads to 4-year-olds every morning and spends the rest of the day teaching them which words rhyme with “lake” and which words have the same beginning sound as “rain.”

“I thought I would be out playing football or some type of sport,” said Malcolm, who has been in a classroom at Walker-Jones Education Campus for less than a month. “I didn’t even, within a hundred years, think I would be in a classroom giving instruction. But this opened my eyes.”

Malcolm spent a recent school day evaluating how quickly the 4-year-olds in Connie Gore’s classroom were able to identify pictures and was testing their literacy skills. But Malcolm made it seem like they were playing a game.

He pulled Eugene Leggette aside and sat down in a tiny chair at a children’s kitchen table set. He told Eugene they were going to play a “championship round” of picture naming. Eugene had to identify as many objects on the flashcards as possible. Malcolm showed a picture of a small, red, round object. “Apple,” Eugene said confidently.

Though he struggled with some of the pictures, Malcolm reassured Eugene with a “good job” or a “ka-ching” each time. In a minute, Eugene had correctly identified 24 pictures. He got just four wrong.

“If the child gets it wrong, you never say ‘No, do it again,’ Malcolm said. “That might decrease their confidence and make them not want to play the game next time.”

This is the kind of interaction at the heart of the program.

“It’s a great experience, not only for the fellow, who hasn’t thought of this career because they haven’t seen male educators of color throughout their education, but it is also great for the pre-K students to see a male of color in the classroom,” said Jennifer Nelson, the school system’s director of school turnaround programs.

Education experts say having teachers of color is important because they are better able to forge relationships with minority students, and studies have shown that students of color do better academically when they have teachers of color.

There are now 10 Leading Men fellows, half of whom started at the beginning of the school year. The other five, including Malcolm, started in January. Antwan Perry, the program’s coordinator, said fellows become invested in student success. During a break at a recent training session, Perry overheard them talking about “interventions” and “benchmarks.”

“It was the most intelligent conversation, and they are 19 and 20 years old,” Perry said.

Perry said he and the other staff members do not push the fellows to pursue teaching careers. The men receive coaching in areas such as résumé building, how to dress professionally for an interview and how to apply for financial aid to attend college. Each fellow also receives a $5,000 scholarship to pursue any career.

Malcolm said that in addition to teaching him how to work in a classroom, the experience already has helped him to be a better parent; he said he is more patient. And even though his daughter Jazmyne is only 3 months old, he is trying to get her to sound out her letters by teaching her “alliteration tricks.”

“My girlfriend laughs, and she is looking at me like I am crazy,” Malcolm said. “But it’s good for her to hear these type of things because you are putting this into their vocabulary bank.”

Malcolm now wants to attend college to become a teacher, though he is not sure when he will enroll in school.

“I am already at the door,” he said. “I am knocking on it, but to go up the steps, I need to get a college education.”