on May 13th, 2016 Posted By BG in Articles
Ayana Jones - Philadelphia Tribune 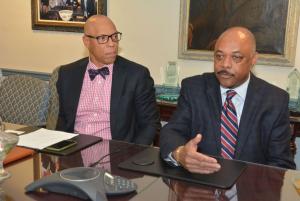 Philadelphia School Superintendent William Hite and Philadelphia Federation of Teachers President Jerry Jordan addressed the importance of increasing diversity in the district’s workforce during a Philadelphia Tribune editorial board meeting this week.

The push for diversity comes as the district needs to fill 560 teacher vacancies for the next school year.

“Understanding that diversity of the children that we serve and the population of the city, it means that we have to be fully committed to ensuring that our workforce reflects that diversity,” Hite said. “It’s really important that our young people have experiences with individuals that look like them, who are from their community and who represent a picture of what our young students could aspire to become.”

According to Hite, African Americans and Latinos represent about 29 percent of the district’s 8,400 teachers.

Hite said the need for a more minority teachers is indicative of a national challenge.

A report by Albert Shanker Institute indicates that the minority share of the American teaching force has grown from 12 to 17 percent from 1987 to 2012. However, minority teachers remain significantly underrepresented relative to the students that they serve. The report found that the most significant impediment to increasing the diversity of the teacher workforce is not found in the recruitment and hiring of minority teachers. According to the report nationally, minority teachers are being hired at a higher proportional rate than other teachers, but they are are leaving the profession at a higher rate than other teachers.

“I would suggest that once you recruit teachers, which is not easy, having the ability to retain them is going to be critically important, otherwise we just have a revolving door,” Jordan said. “We can’t afford to lose teachers. We have to make the profession something that is inviting to them and one that they are excited to go to work every day.”

“In order to do that, we have to look at the operations of our schools, what the roster looks like and what the in school support is going to be for new teachers,” he continued.

The Philadelphia school district offers a peer support program for new teachers where they receive assistance from experienced teachers for the entire school year.

Jordan said the program has had a positive impact on the district, however there is still more work to be done.

“We really need to look this from two different lenses — one the recruitment and retention of teachers but then look at it from the way in which we deal with our students — particularly our African-American males in schools and our disciplinary policies and the kinds of supports that we offer them,” he added.

To help diversify its teaching ranks, district officials have been aggressively recruiting from various Historically Black Colleges and Universities (HBCUs) and working with entities such as the Educating Black Males Coalition, a group working to recruit Black men into the teaching profession.

The district is recruiting teachers as it faces budgetary challenges, school closures, having to lay off staff and the lack of a teachers contract.

“The environment is not conducive to actually being the first choice for individuals who are looking to get into a stable situation,” Hite said. “So part of that is also changing the narrative about trying to make investments in schools, trying to bring back some of the services that other districts take for granted like nurses and counselors and try to make sure that those investments are in place.”

Hite acknowledged the challenge of trying to recruit teachers at a time when college students are pursuing careers other than education.

“When I said it’s a national problem, it’s just not recruitment of minority teachers. There are fewer individuals who are going into schools of education right now across the country,” Hite said. “So this has become an acute problem, just in attracting certifiable individuals into education.”

Jordan addressed how competitive the environment has become in terms of wooing talented professionals into the field of education.

“When I was growing up in Philadelphia, there were three main professions for African Americans: preacher, undertaker or teacher,” said Jordan, who is a third-generation educator. “Now we’re competing for talent with pharmaceutical companies and other professions.”

He said top talent, particularly those who specialize in the areas of science and math, are now recruited by corporate entities who are offering hiring salaries. The average annual starting salary for a new teacher in the district is $45,000.