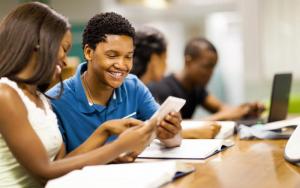 Representing about 2 percent of students awarded a Ph.D. in the U.S. in recent years, Black men have been missing in action as scholars and thought leaders in decision-making positions of many professions. As communities work to solve problems of systematic inequality, their perspectives are sorely needed in scholarship that aims to advance conversations on improving education policy and the academic experience in America.

That’s why the University of Illinois at Chicago’s College of Education this summer is inviting to its campus upper-level high school students who express interest in becoming educators and going the distance in their academic careers with the pursuit of doctoral studies toward becoming research professionals in the field.

“Intentionality is critical for preparing the next generation of African-American male education scholars,” said Alfred Tatum, dean of the UIC College of Education. “I am optimistic that if we do this well, the impact can be far-reaching.”

Through readings that include Born to Rebel by former Morehouse University president Benjamin Elijah Mays, discussions on the African-American experience with education, mentoring by top scholars in the field, as well as an exploration of the neighborhood surrounding the university, which sits on an urban campus just southwest of Chicago’s Loop, the two-week Next Generation of African American Male Educators, specifically Professors, (NGAAME-P) summer program aims to get these young men thinking about what’s important to them toward developing a research agenda that can direct their academic careers.

“We want them to explore what makes them angry, what makes them cry,” said Marcus Croom, NGAAME-P creator and UIC College of Education Ph.D. candidate. “The goal is to put them in touch with their passions and possibility, and have the young men leave with some outline of a scholarly agenda that they really care about and on which they will continue to chip.”

In 2013, U.S. research universities conferred 52,760 doctoral degrees, with 798 Black men earning the educational and professional credential, according to the National Science Foundation’s annual survey of earned doctorates. Even as African-Americans who pursue this level of academic study are drawn to teaching-related programs in greater numbers than other disciplines, Black male education scholars have found themselves the only members of their gender and ethnicity in their program. The number of Black men pursuing education research careers is even smaller.

This spring, Ohio State University made history when four African-American men earned doctoral degrees from its College of Education and Human Ecology. The topics the newly minted Ph.D.s explored for their dissertations illustrate how diversity among the ranks of education scholars can lead to development of public policy that may close the academic and economic achievement gaps that disproportionately affect minorities.

For his dissertation, Royel Johnson examined the influence of early arrests on the odds for college enrollment among Black males. Leroy Long studied the influence of technology adoption on the academic success of first-year engineering students. Todd Suddeth examined the career decision-making processes of Black male college students. Identity label adoption and usage among gay students of color was the subject of Derrick Tillman-Kelly’s work.

Even as UIC’s NGAAME-P is designed to “spark the imaginations of African-American males who want to become education professors,” the program won’t paint a rosy picture of academic life, Croom said.

“A career in education is not going to make you a celebrity,” he said. “But at the same time, if this is what you want to do, we want to welcome you into the field that you have chosen. There’s no better time to make an impact.”

As reflected in White House administration priorities as well as campaign promises of the 2016 presidential election candidates, there has been a growing push from the American people for policymakers to address issues of systematic inequality and limited access to opportunity. Many solutions involve reforming the U.S. educational system. Deciding which voices get privileged and which voices get marginalized in these conversations is key to changing the status quo, Croom said.

The North Carolina native is earning his doctorate in the Literacy, Language and Culture program. He has led summer pre-college programs for African-American males for the UIC College of Education since he arrived in the fall of 2011 after spending five years teaching music to kindergarten through fifth-grade students in Durham, North Carolina.

The last two summers, Croom focused on helping the students develop broad leadership skills. With the launch of NGAAME-P he aims to encourage the 15 young men selected to develop long-term goals for their academic and professional careers as well as prepare them to matriculate into the university. During the program, the teens also will get help with completing applications to UIC undergraduate programs and researching scholarship opportunities.

NGAAME-P also has been developed to honor the history of Black achievement in the field of education. The program is dedicated to the memory of Morehouse College president Benjamin Elijah Mays. During his tenure at the private historically Black college for men between 1940 and 1967, Mays recruited students to the campus, who through their personalities and professions, would later serve the African American community. A young Martin Luther King, Jr. arrived on campus in September 1944 at the age of 15 as an early admission student. Mays maintained a friendship with King beyond Morehouse, ultimately serving as a mentor to the civil rights leader.

“That’s the reason we are where we are,” Croom said. “This is connected to a broader tradition of highly valuing education. We are just using new tools to add on to this history.”

The activities at UIC not only continue the legacy of one generation of leaders helping the next, they are part of a larger effort to increase representation of Black men within the ranks of education scholarship and leadership.

According to recent U.S. Department of Education statistics, Black men make up about 2 percent of the nation’s public school teachers. Even as teacher development programs such as “Call Me MISTER” have been put in place at colleges across the country to recruit African-American men into classroom careers, experts say those efforts aren’t enough.

“Black male teachers alone cannot fix the long-standing social, political, cultural and economic forces that perpetually undermine Black male student achievement,” Shaun R. Harper of the Center for the Study of Race and Equity in Education and Andrew C. Porter, dean of the Graduate School of Education at the University of Pennsylvania, wrote in a 2012 report on the efforts of Grad Prep Academy, a program that the school has created to prepare African-American male undergraduates for careers in education research.

“Often overlooked in efforts to attract more Black men to these roles is their underrepresentation among scholars who conduct research, publish books and scholarly articles and are consulted as experts on education policy and practice,” the report concluded.

The effort has been hindered by overall lagging academic achievement among African-American males, according to the report. Only a third of Black men who enroll in college earn a bachelor’s degree within six years. There also is a dearth in the number of Black males pursing advanced degrees. African-American men account for less than 2 percent of all students who take the GRE, the examination required for admission to most graduate degree programs.

With this summer’s program at UIC, Croom hopes to bring new blood into the field, one student at a time.

“Each young man selected will complete NGAAME-P tasks designed to help him voice, ‘I got next’ as a future education scholar,” Croom said.