on January 27th, 2012 Posted By BG in Articles
by Jackie Alexander - Gainesville.com 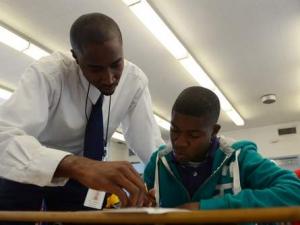 When Juliun Kinsey recently volunteered as an instructor at Terwilliger Elementary School, the Santa Fe College graduate noticed something missing.

The children, he said, had few teachers who, like him, shared their skin color.

“Teachers should reflect the student body,” Kinsey said. “If a majority of your kids are minority, but 90 percent of your teachers are white females, it limits what a kid believes is successful.”

Research analysis shows that minority students perform better when their teachers are of the same race.

A 2011 working paper published by the National Bureau of Economic Research shows that community college students of color were more likely to pass courses taught by teachers of the same skin color. The economists on the project dubbed the result the “role-model effect,” which is particularly effective on younger students.

Education researcher Thomas Dee published in the journal Education Next an analysis of performance of minority students during the Tennessee STAR project.

Alachua County Public Schools officials say they hope to implement programs to attract more minority teachers to the district and keep them there, but getting them from college to the classroom is challenging enough with recent cuts to two programs that assist aspiring minority teachers.

“The entire state is struggling with recruiting minority teachers,” he said.

In Alachua County public schools, about 11 percent of teachers are black, while about a third of the students are black.

“We need to look at ways to recruit from within,” Lyons said, by targeting minority students and encouraging them to join educational programs and then rejoining the district.

Funding for Minority Teachers, a program created in 1996, provides scholarships to minority students at various colleges.

State statute calls for the program to provide annual scholarships of $4,000 for each aspiring minority teaching scholar in his or her junior year.

In recent years, the program has taken a financial hit. Under Gov. Rick Scott’s budget, $100,000 would be allocated for scholarships with another $985,000 earmarked for operations.

During the 2008 fiscal year, more than $3 million was earmarked for the program.

The Call Me MISTER program, which originated at Clemson University, also has been shuttered because of budget cuts. The program provided full tuition, books and fees for five minority men at several community and state colleges.

Ulysses Gilbert, state program director, said he saw the gaps the program could fill in Florida. The state provided $300,000 when the program began, but recently lost out on further funding to another program during the Race to the Top process.

“It still exists, but we are in desperate need of funding,” he said. “We have approached state legislators; they’ve turned a blind eye and a deaf ear to the cause.”

Kinsey said he was one of the lucky ones. He managed to finish his Santa Fe degree and soon will start work on his bachelor’s degree at the University of North Florida in Jacksonville.

Others weren’t so fortunate.

Three students weren’t able to continue their education without the tuition assistance, so they left to get jobs elsewhere in the state, Gilbert said.

“I did my best to try to keep them together, but they need money,” Gilbert said.

School districts around the state have employed new programs to attract male minority teachers like Kinsey.

“If I teach in Duval County, they have a partnership with the Lastinger Center to fully fund my master’s degree,” Kinsey said. “If I come to Gainesville, they don’t have a program for that. If I want to become a master teacher, I have to do it on my own.”

Polk County recently announced its PRIDE program, or Planning and Rewarding Diversity in Education. PRIDE will recruit at least 42 aspiring teachers over the next three years to attend the University of South Florida Polytechnic in Lakeland.

It was Project PRIDE that beat out Call Me MISTER for $4.1 million in grant funding, Gilbert said. PRIDE’s grant proposal was selected as the state’s component to increase diversity in the teaching workforce.

For each year of tuition assistance through PRIDE, the students pledge to work for a year in a low-income Polk school.

Alachua County needs them too, Lyons said. The district is exploring creating a mentoring group for minority teachers.

“Mentoring is not just good for students,” he said. “It’s good for teachers as well.”

Lyons said he spent the first five years of his career trying to move back to his hometown of Nashville, Tenn.

“I just didn’t have the support I needed to live the lifestyle I wanted,” he said, but “I still had the passion. That hasn’t changed much.”

An official network could help new teachers learn not only professionally but tap into the rich social and academic ties of the area — ties that might bind them to the community and the district, Lyons said.

“We’re just going to have to do a better job at looking at those high-quality minority teachers we have and focus on meeting their needs immediately,” he said. “Sometimes they get lost in the shuffle, and we lose them.”