on July 6th, 2014 Posted By BG in Articles
By Eric Boodman - Pittsburgh Post-Gazette 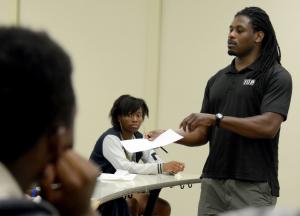 National statistics echo this scene, which involved about 20 black students, most from Pittsburgh Westinghouse 6-12 in Homewood. Less than 2 percent of teachers in the U.S. are African-American males, according to Robert Millward, education professor at IUP. To try to increase those numbers, Mr. Millward started the Black Men Teaching Initiative, which led to the teens, male and female, from Homewood Children’s Village attending a workshop at IUP.

Through workshops such as this one, billboards on buses and changes in admissions policies, professors and administrators at IUP, California University of Pennsylvania, Point Park University and Community College of Allegheny County are trying to persuade young black men to pursue higher education and to become teachers. The second task is more difficult than the first, Mr. Millward explained.

“They say that teachers don’t make much,” he said. “They see teaching as a woman’s profession. They say, ‘I didn’t have a good experience in school, so why would I want to spend life teaching?’ ”

He traces their lack of interest back to Brown v. Board of Education, the 1954 decision in which the U.S. Supreme Court declared school segregation unconstitutional.

“The African-Americans were bused over to the white schools,” he said. “It wasn’t a two-way route. Many black principals and teachers lost their jobs.”

Of the few who were offered jobs at white schools, the positions open to them were often less prestigious or lower-paid than the ones they previously had held, he said.

Rich Milner, a professor at University of Pittsburgh who specializes in urban education, said that before 1954, teaching was one of the three main professions that allowed African-Americans to move into the middle class; the others were nursing and the clergy. Teachers were seen as community leaders beyond the walls of the classroom, he said.

When the number of black teachers dropped, the number of positive male role models dropped with it. Walter Lewis, who accompanied the students to the IUP workshop, is a student advocate and program manager at the Homewood Children’s Village. Many of the families that he works with do not have father figures.

“A lot of the students call me ‘dad’ or ‘uncle,’ ” he said. “I am often the positive male role model. They need someone who can say, ‘Don’t do that’ — someone who is not afraid of them.”

The organizers of the Black Men Teaching Initiative hope that providing African-American middle and high school students with mentors and role models will create a snowball effect. Stanley Denton, the professor in charge of the initiative at Point Park University, remembers being stared at as he walked the halls of Pittsburgh schools as the district’s director of multicultural education.

The initiative takes various forms at different schools. Point Park has a focus on recruiting math and science teachers, persuading teachers assistants to go back to school to become certified teachers and training future teachers to be “culturally competent.” At CCAC, the emphasis is on getting students the prerequisites they need at a lower tuition so they can transfer into four-year education programs, said Elizabeth Strenkowski.

The Heinz Endowments, which gave $360,000 over the past three years through its African-American Men and Boys Task Force , funds the program. Stanley Thompson, education program director, said that it complemented the work of other Heinz-funded projects, such as the fellows program, in which a few African-American college graduates are given a salary to visit schools as mentors and a stipend to work on a master’s degree, preferably in a field related to teaching.

While outside education experts applaud the effort, they also warn against viewing an increase in the numbers as the only solution. “It can’t be seen as a panacea,” Mr. Milner said. He mentioned inequitable funding, inadequate resources and under-qualified teachers as hurdles that can trip up black students, regardless of the number of black male teachers.

Nina Esposito-Visgitis, president of the Pittsburgh Federation of Teachers, also admires the program. “We need a diverse population of teachers, but we need to make sure that all our teachers get the special training that urban teachers need,” she said.