on September 15th, 2016 Posted By BG in Articles
By Theresa Bourke - Echo Journal 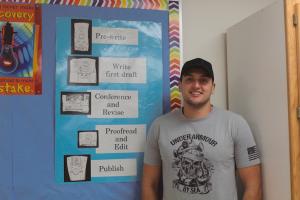 From college football player and aspiring coach to fourth-grade teacher. That’s how Adam Langan ended up in Nisswa.

“I kind of lost interest in football the second year I was playing and really gained more interest in teaching,” Langan said. “(I) realized that teaching was really what I wanted to do.”

A 2016 graduate of Bemidji State University, the Thief River Falls native grew up with teaching in his blood.

“Both my grandparents were teachers,” Langan said. “I remember growing up and talking to them about teaching and how they really enjoyed teaching for many years … All the conversations kind of revolved around teaching, so I really saw myself being a teacher right away.”

The family ties aren’t the only reasons Langan chose this career path.

“Kids are awesome. That’s basically my main reason. They’re always full of joy,” he said. “They’re really ready to learn all the time. And if you can really engage them with awesome lessons, then the teaching process is so much fun.”

As Nisswa Elementary School’s new fourth-grade teacher, Langan knows his first “real” job as a college graduate might be difficult at first.

“For everybody’s first job, it’s always going to be a challenge,” he said. “But I have to stay organized and get a good routine down, and it should be pretty good after the first couple weeks.”

Though he might face challenges, the new teacher was eager to start the school year earlier this week.

“I am actually really looking forward to getting to know all the kids. That’s … one of the big reasons why I chose this school,” Langan said. “It sounds like the family involvement is awesome, and it sounds like you really get to know the kids.”

Nearby family and a love of the outdoors also drew Langan to Nisswa.

“My sister … probably about six years ago, got a job teaching early childhood in the area. And she absolutely loves the Brainerd area,” he said. “In college, sort of toward the end, I was like, ‘I could really see myself sticking around the outdoorsy area.'”

Another familiar face factored into the equation as well.

Just as the area is new for Langan, his presence at Nisswa School will be new for many of the students.

“A lot of the kids’ parents I was talking to at the open house said, ‘You’re going to be the first male teacher they’ve had.’ So I thought, ‘Oh that’s kind of cool.’ So a lot of them are going to be pretty surprised,” he said.

Though the surprise may shock some students, Langan is optimistic that his personality will help him to be successful in the classroom.

“I’m pretty outgoing. I’m kind of known as a big teddy bear,” he said. “I think it’ll be fun. It’s going to be a lot different for the kids, but … I just know it’s going to be an awesome time.”

Langan also believes the uniqueness of Nisswa School will make for an exciting year.

“They have a really different perspective on teaching compared to a lot of the schools I’ve been in,” he said. “The whole curriculum sounds great.”

In terms of curriculum, Langan enjoyed math the most during his student teaching days in Bemidji, but reading also began to pique his interest.

“With student teaching, the one thing I really like was reading,” Langan said. “We’d all have book talks all the time. And they (the students) would really bring in self experiences with the book, which led to really great discussions, which also helped them probably comprehend a lot more.”

The students, the families and the location lead this new teacher to believe Nisswa will be his home for many years to come.

“This school, like I said, is fantastic. The area is gorgeous. The parent involvement, that’s huge,” Langan said. “So I can really see myself staying here for a long time.”