on November 14th, 2011 Posted By BG in Articles
By Patrick B. Anderson - LaCross Tribune 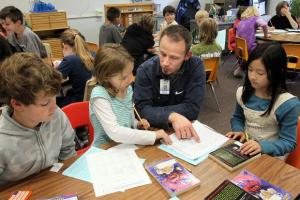 Josh Shively embraced the role of stay-at-home dad without flinching at gender stereotypes.

Patience, drive and the desire to be a role model made him a good father.

Eight years later, the same characteristics helped him pursue a new career – a job with more of an impact than the retail position he quit when his first daughter was born.

“Being a parent gives you a different insight into how kids are behaving,” Shively said. “It also might give you a little more empathy for those kids, and their parents as well.”

Students sit at tables, not desks. A plastic skeleton hangs from the white board. Strands of colorful beads dangle from a shelf, between piles of books and games.

The job is exhausting and fulfilling, Shively said. His fourth- and fifth-grade students are different from his daughters – some need extra guidance, extra patience.

“I enjoy this age group,” he said. “This year is the year they figure out what it actually means.”

He wants to see them all succeed.

Still, he’s glad he was a father first. It helped him approach teaching from a new angle.

When his first daughter was born in 1999, Shively was working at a bike shop. His wife, Kim, was a choir teacher at Central High School.

The couple knew some one would stay home full time with the baby, and Kim’s job offered the insurance benefits their family needed.

“It wasn’t a terribly hard choice,” Shively said. “We knew that we didn’t want to have to use day care.”

Shively’s patience and kindness were proof to Kim that her husband would succeed as a full-time father.

“I thought our kids will have a really interesting experience with him at home,” she said. “I felt good about it from the head and the heart.”

Like all new jobs, becoming a full-time father came with a learning curve.

“I learned how to change diapers when we had our first kid,” Shively said.

He planned meals, bought groceries, washed and folded clothes. He brought his daughters to play groups with other parents. Often, he was the only father to show up, but that didn’t bother him.

“There were times that I would just say, I’ve got a kid here, too, and I’m going to hang out,” Shively said.

He found ways to stay social. Shively played drums and taught music lessons. He continued to pursue a passion for bicycling he picked up in college. He started competing in triathlons and teaching exercise classes at the YMCA.

Shively considered returning to retail or sales when both his daughters started school. Either option could have meant more money.

“But I just thought, what do I want to be my life’s work?” Shively said.

He noticed a lack of positive male role models for some children when he was raising his daughters, and believed he might be able to fill the gap. His wife’s work at Central and his own experiences at home helped open his eyes to the world of education.

“Just from being a parent volunteer and visiting their rooms, I thought, this is something that I really enjoy,” Shively said.

Leaving behind his duties at home was hard, Shively said. He went back to school full-time, which meant time away from his family. It also meant supporting a family and paying tuition on Kim’s salary.

“Having to sometimes say, I can’t spend time with you because I have to study this or write this,” he said. “I did prioritize school over family, just because we have the bigger picture in mind.”

Shively spent the next year commuting back and forth from St. Mary’s University in Winona, Minn. to earn his masters degree in education.

Shively took the job in La Crosse this year, knowing his daughter Ava would be in his class. Now, teaching intersects directly with his family life. Ava eats lunch with him once a week and stays late as Shively finishes his work.

“As a teacher I think he’s a little more serious,” 9-year-old Ava said. “He’s more interested in people being in line.”

Kim resigned from Central this year, leaving Shively as the family breadwinner.

It means the family is once again depending on a single teacher’s salary, but Shively loves his job.

“For me,” he said, “that’s where I’m kind of finding that meaning of life.”