on April 30th, 2017 Posted By BG in Articles
by Holly Fournier - The Detroit News 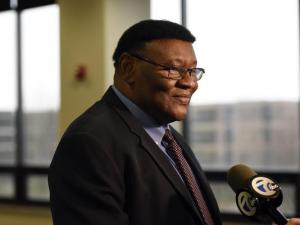 Former Detroit Police Chief and Deputy Mayor Isaiah McKinnon keeps in touch with three of his Detroit teachers, now retired and in their early 90s.

They were his only black male teachers growing up, he said.

“I saw these strong men,” McKinnon said. “It had a true impact on my life.”

McKinnon hopes to attract more minority men to the teaching profession through a “We Need Great Teachers” partnership launched Thursday between the Detroit Public Schools Community District and the University of Detroit Mercy, where he is an associate professor of education. Organizers said they will work on attracting talent of any gender and race, with a special focus on African-American males.

“When I retired as deputy mayor and came back here, (university President) Dr. (Antoine) Garibaldi gave me several assignments and this is one of them,” McKinnon said at a meeting on campus between university education department personnel and dozens of Detroit school principals. “We have to go out and see what we can do in terms of getting men of color into this field of education.”

Roughly 2 percent of the nation’s teachers are black males, according to a Department of Education report from last year.

The initiative is in its infancy, with no solid programs yet in place. Attendees at Thursday’s meeting worked in groups to brainstorm ideas, including the creation of education-related volunteer opportunities and the launch of a “Teacher Academy” for high school students at the university.

“I’m asking you, if you know young people who might have this thought about going into education, let me know,” McKinnon said. “I personally will go talk to them.”

To prove the sincerity of his offer, McKinnon announced his cellphone number to the room.

Garibaldi made clear the university supports the initiative.

“I’m very hopeful that this collaboration that we’re talking about today can really take off and we can be very successful,” he said. “This university is really committed to increasing the number of teacher education programs.”

Among Garibaldi’s ideas is a scholarship for high school graduates who commit to teaching.

“Wouldn’t it be wonderful if we could begin a program so that students left high school with a scholarship to become a teacher? And I’m not talking about a loan. All we would ask from them is a commitment to teach in the (Detroit) system for a period of time,” he said. “Let’s not worry about what it’s going to cost. Let’s not worry about the time it’s going to take. We’ll find the money and we’ll find the students.”

Garibaldi has experience in these types of initiatives, including involvement in a “Teacher Cadet” program at Xavier University of Louisiana. Area students visited the campus two afternoons each week for 16 weeks. The students thrived, Garibaldi said.

“We found that students began to behave a little bit differently in their classrooms. They had a closer affinity with their teachers,” he said. “Some of those students were much more motivated to become a teacher after that.”

The initiative could become an important step in the fight against teacher shortages and a lack of minority men in education, McKinnon said.

“By doing this, by getting these young men into the field of education and changing their lives, we can literally change this country,” he said. “It’s not just the city of Detroit or the state of Michigan.”